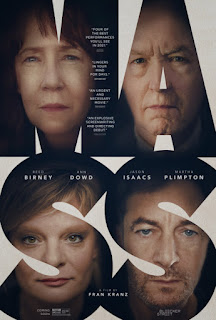 There are countless ways of dealing with grief, and Mass brilliantly gives us a window into a particular kind of grief dealt with by four people.  The film is set up so that it’s not clear exactly why two couples are meeting at a church none of them belongs to.  We only see a therapist-like woman visiting to make sure the room is OK, and the reverend’s wife trying to make sure everything is just right.

This part of the film is a bit tedious—the church woman is overly anxious, and the volunteer teenager has to hold his patience with her in check.  We also see one couple—Gail (Plimpton) and Jay (Isaacs)—arriving in their car, she being extremely ambivalent about proceeding.  Her husband is understanding, giving her an out if she wants it, but she finally relents.

They proceed to the church, and pretty soon another couple—Linda (Dowd) and Richard (Birney)—enters, and after awkward interchanges, they finally sit down together at a table.  Still, the filmmakers keep us in suspense as to exactly what has brought them together, although there are hints that they are there to work through something having to do with death.

I think the filmmakers made a wise choice in keeping viewers wondering for such a long time, part of which is probably good filmmaking, but partly I think it’s to prepare us for a wrenching session.  What follows are graphic statements and coping defenses that give us an idea of each person’s personality.  One is all logic and reasoning, wishing to bring to light some “answer.”  Another is so pained she can hardly say anything, but both of them let slip many accusatory comments, dismissing whatever the other two might say.

The other couple seem mismatched, and it’s later implied that they are divorced—or at least don’t live together anymore, not uncommon after a tragedy.  She comes across a bit like a therapist, insightful, nondefensive, sympathetic, and more comfortable than any of them expressing her emotions.  He comes across as someone with more education than the others, but also less defensive toward the other couple.  He tries as best he can to explain his/their position.

The four award-winning actors are superb in revealing all these aspects of their characters to the audience.  They merge with their characters so well, one can easily forget they’re acting.

Writer-director Fran Kranz is spot-on in depicting parents in their situation.  Accusations, guilt, stuttering while expressing one’s feelings, and a ton of ambivalence captures such a scene.  I admire Kranz’s choosing to depict this interchange, but perhaps it also shows insight gained from personal experience.

The actors could not be better cast, and they play their roles with skill and honesty.

This is not a film to enjoy, but one to value for the heroic roles some parents are forced to play.

Posted by donnarcopeland at 12:52 PM