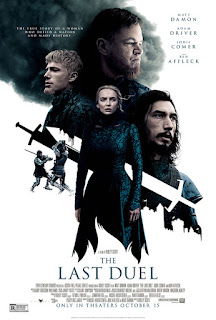 I can’t think of any movie I would want to see three times back-to-back.  But that is a little like viewing The Last Duel.  It is supposed to be a story told from different points of view, but since the versions are not all that different from one another, the effect is repetitiousness.  Why am I seeing the same scenes over and over?

The setting is in Normandy, France, during the 14th Century, with all its primitive beliefs about women and religion at that time.  The main characters are drawn up in detail.  Jean de Carrouges (Damon) is a by-the-book kind of man with a strict moral code.  He is loyal to the king and a noteworthy fighter, but he is not personable in any way and turns people off with his bluntness.  Although they start out as friends, he and Jacques de Gris (Driver) end up being rivals to the death.  Jacques is just the opposite of Jean; good-looking, charming, persuasive, and quite willing to cut corners to please Count d’Alencon (Affleck), and the Count rewards him generously.

The part of the story that’s the most interesting is the transformation in the relationship between these two men—and all the players who contributed to that transition, along with the basic nature of each man.  The movie is good at showing how Jacques elicits Jean’s suspiciousness, and Jean’s lack of awareness of Jacques speaking up for him.  It shows how common gossip can work both for and against those who perpetrate and foster it.  It shows how an autocratic regime is ultimately bad for most people and how it stymies efforts directed toward the good.  It also makes the point loud and clear about women in that era being the property of their husbands, and a crime against a woman is really a crime against her husband.

The acting is another strength of The Last Duel.  Damon, Driver, and Affleck live up to their reputations for playing various kinds of characters successfully.  Driver is especially skilled in facial expressiveness and demonstrating the nuances of a role, particularly one like this where he has to appear both genuine and duplicitous.  Damon can do the same thing, but this role is typical for him in its earnestness and honesty.  I almost didn’t recognize Affleck as the oily Count d’Alencon with a blond wig! But he aced it.  A shining new star is Jodie Comer (TV’s “Killing Eve”, Free Guy and Star Wars Episode IX) who appears authentic as a woman of the 14th Century in a role completely unlike those she’s had before.

The movie shows the brutality (to us in the 21st Century) of the 14th Century ethos and possibly make us grateful for the time we live in.  It depicts the last legally sanctioned duel in France’s history

The Last Duel could be a lesson well told; but it’s just too bad the filmmakers didn’t spot some contradictions.  Number one is that Jean’s superior fighting/dueling skills would lead us to think that he could make quick work of the partying, bureaucratic Jacques.  That duel went on far too long.  The battles shown were also unnecessary, particularly since it was almost impossible to distinguish the fighters from one another and determine what was going on—a huge task for the cinematographer.  This film needed an editor with a skilled pen.

Given the talent involved in The Last Duel, it’s quite surprising that it didn’t soar.