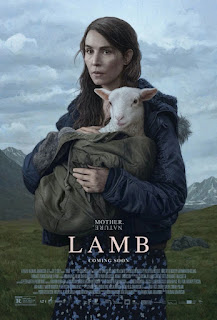 This surreal production written by Sjon (poet/novelist/lyricist, known for von Trier’s Dancer in the Dark) and writer-director Valdimar Johannsson based on Nordic legend, creates an otherworld kind of experience.  The first part depicts the lives of Maria (Rapace) and Ingvar (Gudnason) on their sheep farm in Iceland where they obviously work very hard but seem not to have much conversation or intimacy.  Or are they dealing with some pain?  A bit of tenderness is shown between them, but one wonders what holds them together beyond the chores and responsibilities.

They have apparently lost a child, so when a sort of miracle occurs while they’re helping a ewe give birth, what emerges is a being with a sheep’s head above a child’s body.  Parental instincts take over, so the couple adopts her and names her Ida, the same name as their dead child, setting up a crib in their bedroom and feeding her with a bottle.  Ada seems to bring a spark of happiness to the household, and she begins to grow up, wearing human clothes and shoes.  She’s treated like a real child and seems to understand language.

Of course, all this seems very strange to Ingvar’s brother Petur who has suddenly turned up one day.  Petur tries to talk to Ingvar about the strange situation, but his brother tells him to lay off and not disturb their happiness.  Petur’s incredulity and discomfort persists until he puts himself to a test.

The story takes sudden twists from time to time, alternated with breath-taking views of the Icelandic countryside in the winter with snow and ice and in the spring when flowers are blooming.  With these scenes and the neatness and orderliness of the farm, one gets a sense of order and place in the universe as a whole.  Now, when the natural world is “messed with”, even the animals—the  sheep, the dog, the cat--all react with stares and skeptical eyes that seem to convey, “What is going on?”

Hopefully, you will see the film without knowing much about it, because some of the events and the ending will surprise and shock you, which makes for a much richer experience, giving you clues about what the filmmakers had in mind.

Noomi Rapace as a consummate actor, always bring more than a hint of mystery and intrigue to her roles (e.g., The Girl with the Dragon Tattoo, The Girl Who Played with Fire, Prometheus), and here as Maria she is mostly taciturn but decisive, taking whatever action she is compelled to do. We never really know what is going on in her mind.   Gudnason plays Ingvar as the cool, silent, competent type whose gentleness shines through, and I admired the egalitarian relationship she and Ingvar achieve.

Although Hlynur as Petur plays his role well as a conflicted soul without high principles, it isn’t clear to me why he is included in the story.  What does he represent?  Perhaps society as a whole—judgmental, but he is clearly not one grounded in solid principles.

This is apparently Johannsson’s first direction of a feature film, which he can be proud of.  With more experience, I expect that such things as pacing, antecedent information, and elaboration of details will improve.

What to do with a human/animal hybrid?  One couple sees no problem at all.

Posted by donnarcopeland at 11:22 AM