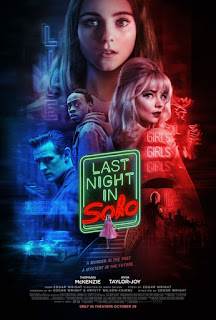 The most charming and fortuitous part of this film is the opening when Eloise (McKenzie) is dancing with abandon in her bedroom anticipating her dreams coming true in becoming a fashion designer in London.  She has been accepted into a design school there and has high hopes of being a success.  Her grandmother (Nolan) whom she lives with expresses her concern about Eloise keeping herself together in the big city, but Eloise brushes aside her concerns and rushes off.

Her first encounters with her new roommate (Karlsen) and her friends are stressful, and Ellie (now) wisely finds her own place to live with Miss Collins (Rigg) who has strict but not unreasonable rules.  She lives near a French bistro and a pub—all set-ups for a ripe imagination.

An interesting twist is director Edgar Wright (cowriter with Krysty Wilson-Cairns) introducing an alter-ego for Ellie, “Sandie” (Taylor-Joy), one who is more an expression of Ellie’s imagination than Ellie herself. Sandie is bold, daring, seductive, and assertively puts herself forward in getting what she wants.  This creates problems for Ellie who must clamp down on Sandie when she is getting too wild.  Sandie haunts Ellie in her dreams, only to disappear when Ellie’s morning alarm goes off.  This back-and-forth creates many dramatic and interesting moments in the film.

All this was fascinating for me, expecting that the denouement would be as clever as it is in Wright’s earlier film, Baby Driver.   But no, my wish was not fulfilled.  The ending resembles more Wright’s World’s End.   Last Night in Soho ends up being far-fetched, turning into a fiasco, with a demented mind dissembling into absurdity.  Worse, it slides into the belief in ghosts and their power to continue to haunt the living.

The performances of the actors redeem this movie to some extent.  Thomasina McKenzie and Anya Taylor-Joy are two of my favorite actresses and casting (Nina Gold, Martin Ware) them as two aspects of Eloise is truly clever.  The filmmakers (Chung-hoon Chung, cinematographer) are admirably clever in making their faces appear so much the same.  McKenzie and Taylor-Joy swerving back and forth into each other is a hallmark of expertise on the part of the actors as well as the crafts people.

Classified as a drama/horror/mystery/thriller, Last Night in Soho meets these criteria, but it goes over the top into something completely unbelievable, I detached from it eventually.  The two-hour run time is part of the problem; after ninety minutes, I was ready for it to be over.  It was like the filmmakers were just spattering us with horrors stacked upon one another just for the sake of extending the time.  Not necessary.

Last Night in Soho sets us up for expecting knowledge and cleverness but lets us down by ending in the usual horror movie absurdity.

Posted by donnarcopeland at 1:34 PM