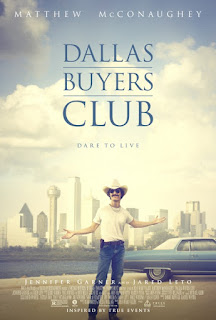 I had two reactions to Dallas Buyers Club.  One is admiration for the real Ron Woodruff on whom the story is based.  He started out as a self-centered, angry, playboy who didn’t mind scamming his friends, but then shored up after he became ill with HIV, and began to help others (albeit to his own advantage).  Since he was equipped to recognize scams coming from others, he took on the establishment by outing the FDA for unprofessional practices.  Ever the hustler, he forms a club requiring $400/month, and in return the member receives all the drugs available at the club for free.  (How he acquires these medications is part of the story.)  Matthew McConaughey gives a stellar performance as this figure, looking and playing the part of an emaciated loser-turned advocate for medical patients.
My other reaction is to what I regard as the “Hollywood treatment” of serious issues, namely medical research and the FDA.  Granted, I do not know the true story of Woodruff, but I did work in a cancer center for over 20 years, so have a great deal of respect for medical practice and research.  Although the film does not explicitly advocate running to Mexico for treatments, it provides a model for those who are apprehensive about standard treatment in the U.S.  In fact, many, many people have done that to their regret, including some film stars.  Although I would not defend the FDA entirely, for the most part it has protected Americans from horrific drugs such as thalidomide.  Still, I think it timely that Dallas Buyers Club highlights an example of how pharmaceutical companies and medicine allowed their partnership to undermine their objectivity in testing the effects of AZT on HIV.  Another bother for me about the film is the example of Ron making a few trips to the library, which equips him to provide drugs to seriously ill patients and chart their progress as a means of testing the treatment’s effectiveness.  There is a reason why placebo controlled, double blind, randomized trials have become the standard in medical research.
On the other hand, as a drama, Dallas Buyers Club is entertaining, suspenseful, and interesting.  Along with McConaughey, Jared Leto as Woodruff’s transsexual business partner is fascinating.  He becomes so by sheer force of his charm and astute bargaining with the homophobic Woodruff.  Eventually, they create a workable association, and it is nice to see Woodruff relent and develop caring feelings toward him.

Matthew McConaughey gives a stellar performance as a playboy who changes to become an advocate for medical patients.

Posted by donnarcopeland at 1:44 PM