I DREAM TOO MUCH 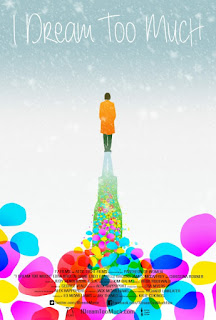 I Dream too Much is one of those rare coming-of-age dramas about a female.  Dora (Brolin) has just graduated from college and is studying for the LSAT, but she is a dreamy kind of person who wants to travel the world.  It doesn’t help that two of her friends are headed to Brazil for a vacation.  The character seems much younger than her age—she’s more like a 14 year-old, rather giggly and squealing with her friend and constantly at odds with her mother (Rouner).  This and her flighty, pressured speech for the first part of the film made it too “girly” for me, and hard to stick with.
When Dora hears that her elderly great aunt in upstate New York has broken her foot, she gets the bright idea of going there and helping out.  Her mother is none too pleased, but consents to it in the hope that in a quiet environment, Dora will be better able to prepare for the entrance exam for law school.
Dora arrives all chirpy and keyed up only to find that her Aunt Vera (Ladd) is rather grumpy and hard to please.  A strong part of the film, however, is that eventually they find their groove and have meaningful conversations prompted by Vera’s memories of her life.  Dora is fascinated by the stories, and when she finds letters and journals in a box in the closet written by her aunt through the years, she is transfixed.
One day, Dora happens upon a boutique and is immediately drawn to the salesperson, Abbey, an aspiring singer/songwriter who helps her pick out clothes that give her more style, and the two become friends.  During one of Dora’s visits to the store, a man walks in looking for a gift for his girlfriend, and Abbey almost faints because Nikki (McCaffrey) is a music producer.  Dora immediately steps up and promises Abbey that she will manage to get an audition for her with Nikki.
One of Dora’s positive traits is that she likes to help people; however, her judgment is not always sound, and if she is distracted she might forget her noble intentions.  It is at this point in the narrative that I became engaged in the story.  It’s when Dora gets feedback from Abbey and her aunt that her “helpfulness” is not helpful, and would she please back off.  In fact, both relationships seem endangered.  This is where the coming-of-age theme kicks in; it’s the painful experience of possibly being rejected by two people she really cares about that Dora becomes more insightful and attentive to needs outside her own.
The story becomes even more interesting when Dora’s mother arrives to take her home and the truth comes out about her father’s death and the reason Dora has been told a story about it rather than the truth (guilt, of course).  It’s also an exquisite time when the alliance between oldest and youngest helps the one in the middle, age-wise, that is.
In the end, I liked the film much better than in the beginning when Dora’s character is over-dramatized and downright irritating.  The film has substance in showing how a young person can develop into someone to admire, which is not necessarily a conventional route.  As Vera tells Dora at one point, “You’re a Wells, Dora.  We do not follow a straight line.”  And eventually Vera and Dora discover that they are a lot alike, and Dora goes from saying, “Why is it that everything fabulous always seems so far away from me?” to “Everything fabulous is not so far away from me.”
A Q&A after the Houston Cinema Arts Festival screening of I Dream too Much with writer/director Katie Cokinos, executive producer Richard Linklater, producers Ed and Jack McWilliams, and actor/producer Jay Thames gave the audience background information about the film.  First of all, Cokinos was inspired by her daughter Lula who prefers Jane Austen over films like The Hunger Games, and she wanted to make a film not seen very often—one about girls that is not dark with rape and other violations.  To some extent also, she based the story on her own experience coming out of college (e.g., she was intending to go to law school and ended up in the more creative arts sector, which happens to Dora).
The filmmakers talked about the difficulty in filming, primarily in dealing with three blizzards in the Catskills.  Cokinos said, “I’ve now made my Dr. Zhivago movie!”  There are a number of beautiful snow scenes in one of which Edin Brolin turns blue from the cold.  Director of photography Alex Rappoport, who happens to be Cokinos’ husband, gives us breathtaking winter scenes.  He originally suggested Cokinos make a film that takes place in their hometown, Saugerties, New York, and for Aunt Vera’s elegant house, they found an old 19th century Hindu retreat.  The exterior looks just like an American version of an Austen-inspired mansion.

A female coming-of-age account told with humor and insight.