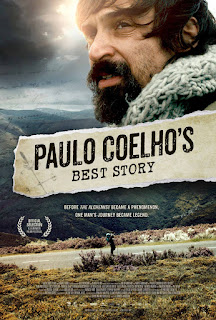 This dramatization of the celebrated Brazilian writer Paulo Coelho’s life, leaves much to be desired.  Paulo Coelho’s Best Story is related in bits and pieces, jumping around in time, which seems to be a fad nowadays.  I would like to hear the director’s (Daniel Augusto) rationale for presenting such a complicated story in this manner.  I will write this review in chronological order to make it easier for the reader.
Coelho is the son of a very successful businessman, Pedro Souza (Diaz), who early on took a dim view of his son’s aspirations to become a writer, along with his mother (Nascimento), and a psychiatrist.  Their response was, “Do you think anyone will want to read what you write?” Throughout his adolescence and early adulthood, Paulo is in major conflicts with his father.  His parents try restrictions as a means of controlling his behavior and depriving him of financial support so he will get a paying job.  But he is rebellious, and gets involved in drugs and heavy drinking.  He has two psychiatric hospitalizations in which he is given shock treatments, but he escapes the second time, and eventually ends up living with his grandparents.
In the 1970’s as a young adult, Paulo is writing seriously.  He lives with Luiza (Vega), who clearly loves him, but is skeptical of his claim that he can move an ashtray just with the power of his mind.  He starts a magazine under the nom de plume of Augusto Figueiredo, writing articles such as “Telepathy”, when a musician named Raul Seixes comes looking for him and wants him to be a record label executive.  He accepts, they become friends and partners, and Paulo starts writing music for Raul to sing.  His relationship with Luiza ends when he gets into the rock scene and writes songs with the sentiment that a man has the right to say and do what he wants.  Luiza sees him with another woman and leaves him.  Subsequently, he finds that Raul is moving to New York, and claiming authorship of Paulo’s songs.
In the 1980’s, Paulo has married a woman named Chris, and this marriage will last more than 30 years.  She encourages him, and voices her frustration about his drinking, about being a music executive rather than a composer.  She urges him to start writing again and not give up on himself.  To help with that she talks him into going to Amsterdam and become part of a mystical order that will help him understand the symbolic language of the world and keep him on the path toward his destiny.  It is after this that Paulo writes his most well known book, The Alchemist, with the message, “When you want something, all the universe conspires in helping you achieve it.”
Despite the many obstacles he has encountered, Coelho, who is still alive, has been amazingly prolific, with over 30 novels published (165 million copies sold and translated into 80 languages), the most famous being The Alchemist, which has been on the New York Times best seller list ever since it was published in 1988.
As noted, a major drawback of the film is its disjointedness.  Coelho’s life is presented in decades, but the story jumps around and you might see him as a white-haired man hiking in the mountains, and then suddenly he’s a rebellious teenager.  Characters new to the story are shown without explanation, and you have to figure out later who they are.  For example after showing something of his teenage years in the beginning of the film, we then see an older man recovering from a heart attack and wanting to leave the hospital, with a woman saying, “no”, he is not strong enough.  It turns out that the man is Coelho and she is his wife of many years.  Similarly, many of Coelho’s pithy observations and thoughts are sprinkled throughout the story without necessarily giving us much of a context.  All of this works to actually hide the real essence of this man who is obviously spiritual, creative, and committed to his calling.

A film that jerks back and forth through time with little exploration into the make-up of the great author Paulo Coelho came to be.

Posted by donnarcopeland at 3:09 PM