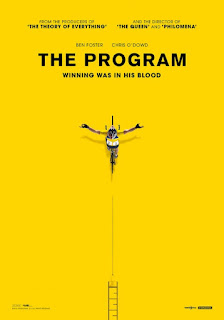 The Program’s opening scene is stark, showing a lone cyclist in the distance huffing and puffing up a steep road in the snow-covered Alps.  Lance Armstrong, the seven-time winner of the Tour de France only to be stripped of his titles years later for doping, has a desire, a hunger, to be a winner.  Soon after, we see him playing a game with a British reporter named David Walsh (O’Dowd), with the stakes that if Walsh loses to Armstrong (Foster), he has to shave off his beard.  Upon winning, Armstrong insists that Walsh follow through, which says a lot about the characters of both men.  Walsh does shave it off, but becomes relentless in pursuing a case against Armstrong for doping.
The Program, directed by Stephen Frears (High Fidelity, The Queen, Philomena), is based on David Walsh’s novel with a screenplay by John Hodge.  It chronicles the meteoric rise and fall of the champion after overcoming testicular cancer with brain metastases and setting up a charity, Live Strong, to help others with the disease.  His decline resounded more loudly partly because of Armstrong’s cockiness and partly because he defended himself so vociferously for so long, even sacrificing some personal and professional relationships in the process.  After he brought a suit against Walsh and his newspaper, which resulted in Walsh being fired, two of his fellow cyclists who had been friends/colleagues but whom he had dumped along the way, testified against him, issuing in the beginning of the end.
After an investigation ended in 2012, a U.S. Anti-Doping Agency decided that Armstrong had indeed used “performance-enhancing drugs” throughout his cycling competitions and banned him from competing in any sport that followed its code.  They stripped him of his titles as well.
And Lance Armstrong did after many years ultimately acknowledge the doping, saying, his was “a mythic, perfect story, but it wasn’t true.”
Although many of us followed the news about Lance Armstrong and the pervasiveness of doping in cycling (in a context where most of the cycling leaders kept overlooking it), Frears’ movie gives a concise and interesting account of all the events, highlighting the kind of man Armstrong is and all the factors that led up to the outcome.  Ben Foster has an uncanny physical resemblance to Armstrong, and his acting skills in portraying the man are impressive.

The Program is a good dramatization of the life so far of Lance Armstrong, the legendary cyclist.

Posted by donnarcopeland at 11:03 AM