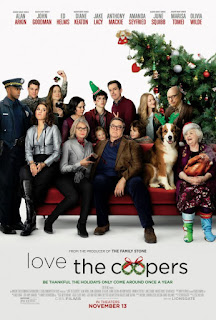 And you probably will end up loving the Coopers in a film that many will see as a perfect holiday movie.  Although don’t expect to be immersed in warm fuzzy feelings throughout; this is a family that can throw barbs and “gotchas” with hardly a twitch of an eyebrow.  They all seem to have some gene that eventually and invariably alienates the person they’re talking to.  The script reads a bit like Little Miss Sunshine in its mixture of bittersweet, tender, and outright comedy.  The difference is that in Love the Coopers there’s a lot more bitterness in tone, especially in the beginning when everyone seems to be writhing with unhappiness—or maybe it’s just anxiety about the upcoming get-together.
The drama mainly centers around couples—not necessarily the expected pairings.  The paterfamilias (Arkin) is alone in his old age, but has made a solid friendship with a young waitress at the local diner (Seyfried).  His daughter Charlotte (Keaton) has been married to Sam (Goodman) for 40 years, but it looks like the parting of the ways for them.  Their current issue is whether or not to announce their separation at the family celebration.  Son Hank (Helms) is going through a divorce, and he is not in good shape at all.  His other daughter Emma (Tomei) is alone not by choice, except maybe it has something to do with her not being able to form a bond with anyone and tending to feel sorry for herself in being alone.  We’re introduced to Charlotte’s and Sam’s daughter Eleanor (Wilde) in the airport where she has bumped into Joe (Lacy) who is headed out to report to duty.  Present at the Christmas celebration are also a number of grandchildren who are as quick-witted and verbal as their elders.
Certain interchanges between characters in the drama really entertained and sparked my interest.  One was Eleanor and Joe doing a complex, often contradictory, mating dance that epitomizes budding relationships today.  Liberal meets conservative, but somehow, after many fits and starts, they find more common ground than conflict.  Another was that between Emma and the policeman (Anthony Mackie) who arrests her for shoplifting.  Being a life coach, she starts out asking him about himself, but when it ends up, he is giving her valuable advice.  They end up helping each other, and he is to be admired for insisting on appropriate boundaries.
The depiction of Sam’s and Charlotte’s relationship is not terribly interesting—it’s rather hackneyed—and although these are fine actors, I found myself yawning and fidgeting during their interchanges.  The best ones (Eleanor and Joe; Emma and Officer Williams) entertain us and make us think, and therein lies the best of this movie.

A soulful family Christmas with meaningful observations on mating.

Posted by donnarcopeland at 9:54 PM