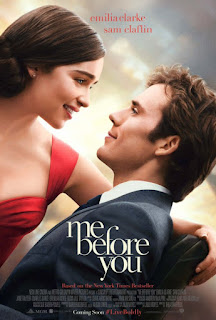 This movie was in very good hands, beginning with the novel and screenplay by Jojo Moyes, direction by Thea Sharrock, accomplished actors, and music by Craig Armstrong.  It illustrates the joys and hardships of a serious medical condition and models constructive ways to deal with it.  Will Traynor (Clafin) has had a serious accident that injured his spinal cord and keeps him confined to a wheelchair.  Before that (as in the title, Me Before You), he seemed to have everything:  looks, successful job, privileged loving family, and a beautiful blonde girlfriend.  Keenly aware of his losses, he is acerbic and bitter most days or simply silent.
Will needs a new caretaker, so his mother (McTeer) interviews a young woman who has clearly not been coached in her responses to questions, but allows enough of her bright, giving personality to shine through for Mrs. Traynor to see enough of her good intentions and warm heart to give her a chance.  Enter Lou Clark (Clarke) with her sunny disposition, old-fashioned charm, funky clothes, and a bit of clumsiness into this well-to-do setting with an educated but embittered young man.
The film is engaging in the way it takes us through the collision of two classes of people, one highly educated and wealthy, the other scraping by economically but demonstrative and outspoken.  The collision is only a little fender-bender, as Will and Lou gradually develop a friendship that is beneficial to both.  It goes through stages from initial guardedness, to some straight talk (her letting him know he needs to shape up), to friendly competition, to kidding, and finally to genuine enjoyment in each other’s company.  He makes playful comments like “Your life is duller than mine” and “Where did you pick up your exotic tastes?” (referring to her choices in clothes and shoes).  She gets him back in touch with simple enjoyments in life in the past and the present.  There is a good lesson in the film here for people in wheelchairs:  Don’t just hibernate at home.
People need people, and thus the film shows the value of a sister’s (Emilia’s, played by Coleman) advice and encouragement, a father’s (Emilia’s, played by Coyle) empathic support, the reasonable wrestling with a big decision by Will’s father (Dance) and mother, and Will’s plea to Emilia for her understanding of his decisions and her standing by him.
Me Before You is thoughtful and provocative, true to life, and full of pointers for people undergoing trauma, as well as those around him/her.  It helps us see that significant events and relationships may change us across time in unpredictable ways, but it’s generally in a positive direction given sufficient support and comfort.  Lou brightens Will’s life considerably, and he helps her realize her potential in ways she probably would never have imagined without his prodding.
Clarke and Clafin make this film what it is to moviegoers, and the viewer is transfixed watching them.  Behind them is the sensitive, knowledgeable novel and screenplay by Moyes and the astute direction of Sharrock (her debut of a feature film direction).  Bravo!

I hope everyone gets the important message of this film:  Individual freedom to choose.