OUR KIND OF TRAITOR 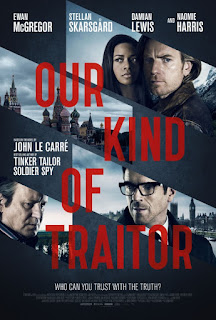 This is a thriller with all the assets of a John le Carré novel—complexity, ambiguity, sharp sleuthing, and heroism—Our Kind of Traitor will keep you on the edge of your seat and make you want to take breaks to relieve the gripping tension.  It begins mysteriously in Moscow at the Bolshoi Ballet (featuring former Houston Ballet dancer, Carlos Acosta), cutting away from time to time to elsewhere where a sober man is seen signing papers under the watchful eyes of a team of sinister men, then he and his friend rejoin their wives and head home.  However, they will never make it.
The setting then switches to Marrakesh in Morocco where Perry (McGregor) and his wife Gail (Harris) are on holiday, when by chance Perry meets a gregarious Russian named Dima (Skarsgärd) who takes him to a wild party with fellow Russians.  Dima seems to be taken with Perry, and invites him to play tennis the next day at his club where they meet each other’s wives, and Perry meets Dima’s children, an older girl and younger twins.  Unbeknownst to him, Perry is in deeper than he would ever imagine.  He is a fairly typical young English professor of poetics, far removed from Dima’s circles in the Russian mafia.
The plot involves the British intelligence service when Dima’s underlying motive for friendship with Perry emerges:  Fearing for his life, knowing he is the target of the Russian boss’s threat, Dima wants to defect with his family to London in exchange for giving MI6 incriminating information about high level officials in the British government.  Hector (Lewis), an MI6 agent, is willing to run with it, but his superior sees it as “You have no proof”, and more as a personal vendetta on Hector’s part to go after his rival Aubrey (Northam), another agent, so advises against it.
The director of the film, Susanna White, keeps the action of the story at a pace similar to one’s sense in reading a le Carré novel—fast and steady with spikes of intrigue and fear.  The fine casting of McGregor, Lewis, Skarsgärd, and Northam in the principal roles contribute much to its quality, complemented by the engaging music of Marcelo Zarvos and intelligent and beautiful cinematography of Anthony Dod Mantle.  I like the way the Perry character is shown at first to be kind of wimpy and easily led on, but as the story proceeds and he gets more and more attached to the fatherly Dima, he transitions into something resembling heroic.  Despite his being a mafia figure, we’re made to admire Dima’s hutzpa, likeableness, devotion to family, and strength in combat, beautifully evinced by the talented Skarsgärd.  Lewis is at home playing a shrewd agent with a moral compass that compels him to seek justice for corrupt individuals.  Naomie Harris as Perry’s girlfriend/wife and a lawyer is valuable as a support and advisor.
In the past I have not been a Le Carré fan—I find his plots very dense, tedious, and sometimes hard to follow (except for the TV adaptation of The Night Manager, which I loved), but Hossein Amini’s screenplay maps the plot very clearly while maintaining ambiguity and excitement.  I liked it as much as I did The Night Manager.