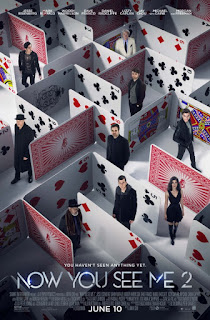 Dazzling sleights of hand, cat and mouse chases, vengeance, and power struggles continue the essence of the Now You See Me films (#3 is already planned).  Revelations about mysteries left unresolved in the first picture are cleverly revealed, specifically with regard to Thaddeus Bradley (Freeman).
The Four Horsemen of Now You See Me have been in hiding for a year after they robbed their sponsor’s Parisian bank account during their performance in New York to give the spoils to their audience, many of who were victims of Hurricane Katrina.  They have been in training for the next big caper, the details of which have not been revealed.  They’re restless and resentful that the secret society from whom they receive their instructions, the Eye, has not provided them with more challenges.  The sponsor of their original show, Arthur Tressler (Caine) of Tressler Insurance, had not been generous to the victims, so the Horsemen considered themselves Robinhood figures who give to the poor what the rich have withheld.  Now, finally, the magic troupe has plans to reappear by usurping a major advertising promotion by the company Octa in London,
But the FBI is after them for their previous heist, along with Thaddeus, in jail for his role in the previous story, and Tressler, who lost millions in one of their heists.  Along for the venomous ride this time is Tressler’s son Walter (Radcliffe) who has a big investment in pleasing and redeeming his father.
Sanguine truths are sprinkled about through this story to at least give it some depth.  Walter, who has learned from his father the value of secrecy, says, “True freedom is not being seen”, an astute observation of one who wants his actions and behavior to remain anonymous.  Another character emphatically refers to the “power of an empty fist”, so useful in magic tricks.  And finally, in the last few moments, Thaddeus observes that “Seeing is believing…” but he thinks it’s important to ask whether what’s seen is truth or lie.  (It’s noted that belief has ‘lie’ in the middle of the word.)
When the film begins, we learn that one of the Horsemen (played by Isla Fisher) is missing, and the team needs to recruit another.  After some disagreement, cheeky Lula (Caplan) is accepted and wins their respect for her skills.  Magic tricks are very similar to those in the first film, and all the actors are captivating in their renditions.  Radcliffe does a fine, convincing job in being evil with daddy issues.
The last scenes are clearly set-ups for Now You See Me 3.

Posted by donnarcopeland at 9:37 AM