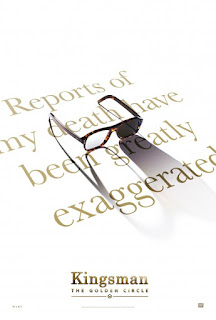 Those who really took to the first Kingsman (2014) are likely to be disappointed in the second adaptation of the Mark Millar/David Gibbons comic book (“The Secret Service”), even though the writing/directing team is the same (Matthew Vaughn, director, and co-writer Jane Goldman), as is the cinematographer (George Richmond).  Where the first film went beyond the flashy technological effects to get in social commentary about the environment, social class, compassion, cooperation, and violence, this version seems to be preoccupied with technology, staging one combat scene after another, without much else in between.  And this is two-plus hours of screen time.
Harry Hart’s (Firth) trainee from the first film, Eggsy (Egerton), is now an agent working with Merlin (Strong) to rein in a mega drug cartel run by the ruthless Poppy (Moore), who has ambitions to addict the whole world to increase her sales, but has ready an antidote against the disastrous effects of her doctored drugs, thereby retaining a continuous client base.  She concocts a plan, essentially putting the President of the United States (Greenwood) into a bind where, no matter what he does after he signs the agreement, Poppy’s plan will go through.
The action takes Eggsy and Merlin to Kentucky, where they meet with private intelligence operatives and discover Hart—who was thought dead—but is alive in a compromised state.  They join forces to go after Poppy, loyalties switch back and forth, and multiple battles take place.  (It’s a bit ironic that in the first film, private intelligence agencies are shown to be bad; whereas in this film, the Kingsmen have little trouble collaborating with them, although, of course, a number of suspicions are raised and tested.)
The script seems to be the biggest problem in The Golden Circle.  It has little substance or character development so becomes, to me, like a trade show for special effects, showing unbelievable lassos, hacking capabilities, and other tools that the characters seem to have ready for any situation, and these are inserted into so many combat scenes any interesting or engaging story is submerged.  Eggsy as the fresh-faced new Kingsman agent seems ill-suited to the tasks placed before him; and although Hart is brought “back to life” to back him up, his status seems so compromised in the beginning and through most of the action, his successes veer toward the unbelievable.
The filmmakers can boast about the number of A-list actors in the film:  Colin Firth, Mark Strong, Julianne Moore, Halle Berry, Elton John, Channing Tatum, Jeff Bridges, Bruce Greenwood, and Emily Watson, and they all perform really well; however, many have little screen time or impactful roles.  Tatum, Bridges, Greenwood, and Watson are only in a few scenes.  Julianne Moore, an outstanding actress, is not quite as formidable as the witch Poppy should be.  She should send chills up your spine, but although Poppy does unbelievably heinous things, it’s hard to imagine these actions coming from the character portrayed by Moore, a fault of the script and/or direction rather than her performance per se.  Elton John is a highlight in all this; he is his character and plays it to the hilt.  His persona and what he does hits the mark, about the only time in the film this happens.

This film is a puzzlement.  Although the original show runners are the same and the actors are top-notch, this version of the Kingsman productions falls far short of the original.

Posted by donnarcopeland at 11:02 AM