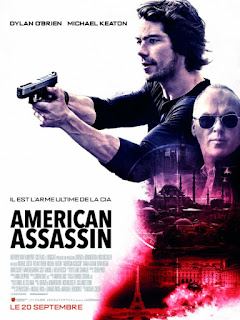 This is a thriller about international intrigue involving the CIA and black ops, Mossad, the Iranians, the Israelis, and a nuclear device, taking place in Malta, Romania, Warsaw, Tripoli, Istanbul, and Rome—all lovely places to visit, but except for a scene here and there, we won’t see much.  The story is set up with young Mitch Rapp (O’Brien) and his girlfriend (Charlotte Vega) on a beautiful beach on Ibiza enjoying tender moments, when they are attacked by Muslim terrorists.  This affects Mitch so profoundly, he signs up to be a black-ops recruit under the tutelage of Stan Hurley (Keaton).  Mitch already has an oppositional streak, which will sometimes serve him well, and sometimes undermine him.  He is expected to get this under control in his training.
Mitch’s recruiter, Irene Kennedy (Lathan) regards him as a prodigy, but Rapp is reluctant on the basis of Mitch’s psychological characteristics.  After rigorous training and a practice run or two, Hurley decides Mitch is ready and takes him into the field.  You know this is a movie when Mitch repeatedly goes against orders and still saves the day.  The most critical operation is one where a rogue agent called “Ghost” (Kitsch), a former star pupil of Hurley’s, collaborates with Iranians in Poland to construct a nuclear weapon.  The rest of the story is about the CIA’s attempts first to retrieve stolen plutonium, and then to sabotage efforts to make a bomb.
The film is fast-paced under the watchful eye of Director Michael Cuesta, whose experience as a producer/director has been primarily in television, but succeeds here too.  Cinematographer Enrique Chediak follows the action and fight sequences so well it’s always clear what is happening—unlike in many action films.  Dylan O’Brien is believable as a fresh-faced green recruit bursting to make his mark, and of course, Keaton is a perfect foil for him.  I did not find Taylor Kitsch to be as formidable and evil as I think he was supposed to be, which diluted the impact of some key scenes.
My problem with action thrillers is that they are so filled with preposterous successes that I’m left cold.  In American Assassin, at one point, a character asks Mitch how he has survived so many close calls, then derides him if he thinks he’s special and deserving of sympathy.  All during the film, Mitch is amidst of all kinds of dangers, but somehow he comes out ahead, and the last scene shows that this is an origin story with sequels to come.  At least this one was more clever than most.

Take a ride on the black-ops special to see intrigue, bloody torturous encounters, and occasional humor.