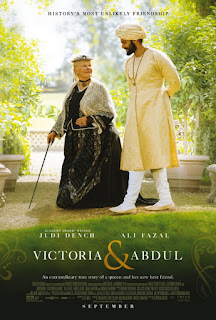 Victoria and Abdul is sumptuously filmed under the fine direction of Stephen Frears, with cinematographer Danny Cohen.  Alan MacDonald (production design), Sara Finlay and Adam Squires (art direction) give us the opportunity to live for a time in royal luxury and splendor against the backdrop of the lush English countryside.  But all of this beauty is offset, sadly, by the rancor and prejudice shown to Abdul (Ali Farzal) by the Queen’s staff and relatives. Abdul was an Indian commoner who had become a favorite of Queen Victoria when she requested two Indian men be brought to her to be her servants.  It appears that she was curious about another culture and thought that, as Empress of India at the time, she needed to know something about it.  She and Abdul seemed to hit it off right away, and he began to instruct her in Urdu and the Koran and “anything else he could think of” (in her words).  This elevated him from wait staff to being her “munshi” (teacher), and during the 15 years of their acquaintance, she continued to promote him and give him honors.
Queen Victoria was much more enamored by her husband Albert than her children, and because of her regal responsibilities, he became the primary parent to their nine children.  Because his German background placed an emphasis on discipline and education, he tried valiantly to instill those values in his children, especially his oldest son and heir to the throne, “Bertie”, Prince of Wales, who would become Edward VII.  Unfortunately for him, Bertie was very different from his older sister Vickie who absorbed her father’s teachings like a sponge; he was so oppositional he appeared to be a dullard, which is how he is portrayed in the film.
Since the Queen had delegated responsibility for the children to her husband, they were not especially devoted to her.  So when Abdul appeared on the scene and was so attentive and worshipful, her maternal instincts were kindled, and he became a favorite, much to the consternation of those around her who had been schooled in proper English society and held disdain for brown-skinned people in British colonies.
This account—“based on a true story…mostly”—of an interesting period late in Queen Victoria’s long reign, is interesting in its illustration of the power of the Queen—even in her old age—her egalitarianism despite the culture around her, a picture of how fawning and self-serving people close to her had become, and how race/class/religious prejudice was so prominent in Victorian England.  It asks us once again, “How long will discrimination against colored people and lower socio-economic classes continue?  Because it’s still all around us today.
Judi Dench is again her own inimitable, consummate portrayer of a real person.  She shines, as always, and Ali Farzal as Abdul, is an able foil.  We become rapt in their relationship, and although there are countless others in all the scenes, they fade in comparison to our fascination with the solid, rather unconventional, friendship.
Although I found most of the film to be top-notch quality, there were times when the film seemed to lapse into parody or a farce when I wanted it to maintain its seriousness and depth.

A successful period film that exposes the underside of what period films typically convey.

Posted by donnarcopeland at 11:35 AM