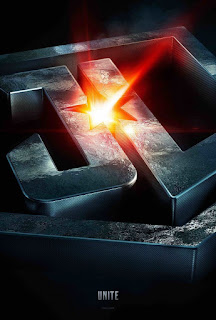 Oh, my, my!  Superman is dead, and the planet is threatened by a terrible force, Steppenwolf (Hinds), who only needs to get three “Mother Boxes” to communicate with one another and the world is his.  (There are more references to ‘mother’ in this action film than all the rest put together.  Hmmm…).  Steppenwolf has started by sidelining the Amazons and Atlantis, and now he is after Planet Earth.
There is the possibility of bringing Superman back from the dead with scientific and super-hero means, and Batman (Affleck) and Wonder Woman (Gadot) have a little argument about the merits of attempting such a feat.  She sees it as risky, but he convinces her that it may be the only option.  He also knows that it will take teamwork, so has been recruiting a team to counteract the threat.  Along with Wonder Woman, he manages to get The Flash (Ezra Miller), Aquaman (Momoa), and a Cyborg (Fisher) created by Dr. Silas Stone (Morton), with Alfred Pennyworth (Irons) at central control.  All finally agree to attempt the resurrection of Superman, who is clearly essential for success.
What follows is the usual formula of an action hero film:  Fight, fight, dialog, fight, fight—always ending up with a fist fight, of course, despite all the fancy gadgets and powers of the players.  The special effects are impressive, as is often the case in these films (production design is by Patrick Tatopoulos (Godzilla, Stargate, Dark City), but the dialog is not of the same caliber.  There are few/no surprising twists and turns, so its primary value is in entertainment, and that’s if you like action hero films.
A star-studded cast makes this film more interesting, particularly with a larger role given to Gal Gadot as Wonder Woman, who is grooming herself to be a leader.  Bruce Wayne (Batman) appears to be flagging a bit and is feeling a bit guilty about his role in Superman’s demise, so maybe the new pairing could be Superman and Wonder Woman.  Along with Henry Cavill and Gal Gadot, Ben Affleck, Ezra Miller, Ciaran Hinds, and Ray Fisher give their characters depth and watchability.
Director Zach Snyder and his writers (including Chris Terrio and Joss Whedon) have delivered a mildly entertaining, watchable film, but one that is indistinguishable from most of the genre.

Wonder Woman proves her worth among her fellow heroes.

Posted by donnarcopeland at 12:59 PM