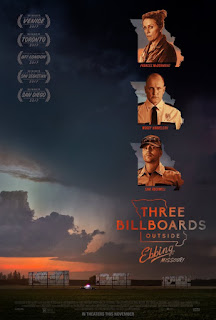 The wistful opening song (“The Last Rose of Summer”) previews the emotional tone underpinning this story, even though comedy and drama emerge time and again throughout.  Seven months before, Mildred’s (McDormand) teenage daughter was raped and killed, and as time goes on and no arrests are made, Mildred—never one to shrink from conflict—starts to agitate for more action from the police, specifically Sheriff Willoughby (Harrelson).  He responds to her respectfully, explaining why, and he sounds reasonable; but Mildred is not to be mollified.  To make her case a public issue, she buys space on three billboards outside of town to post this message:  “Raped while dying.  And still no arrests.  How come, Chief Willoughby?”
With this action, writer/director Martin McDonagh (In Bruges, Seven Psychopaths) gives us a window into Smalltown, USA, and how politics often work there.  And this is one where the Chief of Police is really conscientious, a mensch.  Not so much one of his officers, Jason Dixon (Rockwell), who has a huge chip on his shoulder, is unapologetic about his racist views, and has no trouble bending the law to suit himself.  Sheriff Willoughby has a challenge in mentoring him in his wish to become a detective.
When Mildred singles Willoughby out for her rage, she riles up most of the town folk who are already feeling sympathy for him because word has gotten out that he has cancer.  Some of the truths McDormand is illustrating is that the general public’s memory is short (seven months has made them “forget” the murder); few understand the depth of grief following the loss of a child (the very worst thing to happen to people and something that keeps going on across time), particularly when guilt is involved; and still the genuine caring and protectiveness seen when some in the community understand the issues and act accordingly.  McDonagh shows all these complexities with sensitivity and an even hand.
How does an Irishman get to know this?  McDonagh talks about taking bus rides around the U.S., visiting small towns, and acquainting himself with the people who lived there (Interview on Charlie Rose, 11/9/17 on PBS).  He saw a billboard in one place that first stimulated his thoughts about making this film.  In addition, McDonagh brings his own sensibilities to his dramas; in this case, showing characters in such depth, we see their strengths and weaknesses in equal measure.  And he goes further in showing redemptive experiences, where his characters actually acquire some insight and valiantly try to make positive changes.
McDonagh chose his cast carefully and well.  From the beginning, he knew he wanted McDormand, Harrelson, and Rockwell; and do they all shine.  McDormand is a shoo-in for award nominations for her performance here (previous wins have been an Oscar for Fargo, a Golden Globe for Olive Kitteridge, and Independent Spirit Awards for Friends with Money and Fargo), and her work has been consistently top-notch.  Rockwell deserves supporting role awards for his Dixon, whom he manages to make you hate in the beginning, and then have some sympathy for when he at least partially redeems himself.  Harrelson may not be considered for an award this year for this film, but he lends his expert rendition of a character with good judgment for whom we have great sympathy.  He, McDormand, and     Rockwell are all good for the high comedic moments as well as the drama in this film.
McDonagh’s collaborators in music (Carter Burwell) and cinematography (Ben Davis) help make this film the artistic triumph it is.

A film likely to be on the award circuit when the time comes.

Posted by donnarcopeland at 9:55 AM