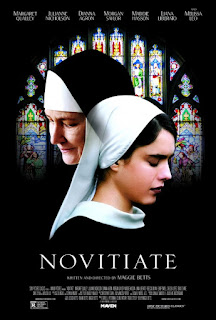 If you feel like you’ve sacrificed too much in your life, go see Novitiate and you’ll probably feel better by thinking you didn’t have it so bad.  (This excludes, of course, those who have been abused.)  Unless you are a Catholic since the before the ‘60’s, you may be surprised (as I was) at the stringencies young nuns had to experience in going through their training.  They’re required to efface themselves in every way one can imagine, following strict rules for every second of the day, and suppressing most of their human emotional experience.  I hope this has changed in the meantime.
Young Cathleen (Qualley) seems perfectly suited for it, even though her family is not religious, but she is enrolled in a Catholic school, and after her father abandons the family, Christ seems like an ideal husband to her.  Where her sister novitiates struggle with ambivalence, she remains confident until…
A parallel theme of the film about the novitiates is that of the Mother Superior (Leo), a woman who has been a nun for 40 years, and revels in her status as head of the convent.  She keeps very strict rules, and appears to take a bit of pleasure in the degradation of those who commit even slight infractions.  Decisions are easy for her in her black-and-white world; either there has been a sin that needs to be punished or—well, there is little of anything else, except actions that bore her, in which case, small penances are required.
But Mother Superior is having a difficult time right alongside her novitiates; Vaticon II is being handed down by Pope John XXiii, in which major changes are decreed, such as that priests must face their congregation during the liturgy, there will be increased religious tolerance, nuns will be able to dress as they wish, etc.  Mother Superior resists these changes for three years, not letting anyone in her convent know about them, and believing until the end that they will not come to place.  When they do, she is devastated.
This is a film about disillusionment—Cathleen’s early on, the Mother Superior’s, and several of the novitiates and those training them, but it’s also about change, and how adaptable people are in accommodating to it.  It’s understandable that someone who has achieved her identity in a specific system and then gets continually reinforced for it will resist any change in the order.  It’s also understandable that someone who buys into a system sincerely, then finds out that forces beyond her control go against it presents a major dilemma for her.  This is the beauty of the film; that it dramatizes real human dilemmas that come about as a result of decisions made, sometimes early in life.  And it doesn’t necessarily take a stand one way or another; it leaves that decision up to the viewer.
The focal point here is Margaret Qualley as Sister Catherine, the young woman trying to find answers to life through a system that promises hope.  It helps, of course, that she is gorgeous, but she is able to back that up with solid acting skills that convey the agony/puzzlement/irritation/naïveté of her character.  Beneath her Mother Superior garb, Melissa Leo proves herself once again a superior actor whose face tells all.  A nod should be given as well to Julianne Nicholson, who plays Catherine’s clueless mother who never gives up on her, even though she understands so little about how her actions brought her to this point with her daughter.
I congratulate Margaret Betts, writer/director, for her feature film debut.  Her awards at the Sundance Film Festival (Special Jury Prize, Grand Jury Prize) do not surprise in the interesting/educational/suspenseful script and direction of the film that moves at an ideal pace and utilizes the talents of the actors to the fullest extent.

This film about religious belief lets the viewer decide about issues.