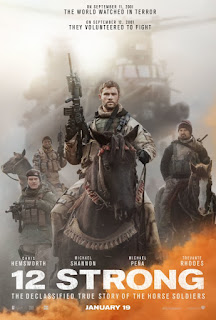 This film had potential, but the filmmakers chose instead to make it one long, two-hour gun battle nonstop.  We hear a bit about the characters in the beginning, but not really enough to feel invested in them.  We are given a bit of war planning and arguing, then the 12 committed men are sent to Afghanistan as elite special forces with the primary purpose of disempowering Al Qaeda.  They will secure the alliance of a Taliban warlord with grudges against his rivals and a mutual hatred of Al Qaeda, which has just attacked the U.S. on 9/1/1.
If we could have been given more back story about Captain Mitch Nelson (Hemsworth) who secured undying loyalty from his team including Hal Spencer (Shannon), Sam Diller (Pena), and others, their confidence in him and his leadership would have been more gratifying.     This is even more salient for the character General Dostum (Negahban), the Taliban leader with whom Captain Nelson has an ambivalent relationship.  What a rich and illuminating history he must have.  Having some light shed on the political and historical background of these relationships would elevate the story beyond constant war skirmishes.
I’m reminded of the jokes about American westerns’ “white” hats and “black” hats that helped us identify the warring parties.  We have no such clues in 12 Strong, where it’s often difficult to tell which fighters are American and which are which Taliban.  Some of them are robed, and we know they are Afghans, but which are General Dostum’s and which are enemies is difficult to see.  My hunch is that those who are familiar with videogames—which are fast-moving—will have an easier time than I had.
Production designer Christopher Glass and the visual effects artists have created impressive sets and special effects.  It is thrilling to see the American bombs hitting their targets and rockets flying through the air.  These filmmakers did their jobs well; I put most of the responsibility for neglecting character development in favor of never-ending battle scenes at the feet of the director, Nicolai Fuglsig.  I believe this is his first foray into directing a feature film, and hopefully, next time he will attend more to emotional and character development to give depth to his films.
Chris Hemsworth is effective in depicting a dedicated American war hero who is sharp and cagy in his analyses and attuned to nuances and competing agendas in his dealings with others, whether friend or foe.  We do get a better idea of what kind of person he is.  That is not the case with the characters of fine actors like Michael Shannon, Michael Pena, Taylor Sheridan, and Navid Negahban.  They were wasted in this movie, considering their intrinsic worth.
This is a story that needs to be told, but with many more details about the circumstances and the people involved.

Knights on (not white) horses win the day (not the war) in Afghanistan post 9/11.

Posted by donnarcopeland at 10:43 AM