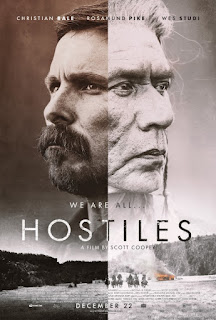 Writer/director Scott Cooper is a master at highlighting genuine but dramatic human dilemmas, as seen in Out of the Furnace, Black Mass, Crazy Heart, and now, Hostiles.  Hostiles depicts the
US Army-Indian conflicts in the late 19th Century.  It opens with a brutal scene of the massacre of a family on an isolated farm/ranch.  American soldiers have experienced huge losses from Indian attacks, and some take great satisfaction in having retaliated in kind.  Cooper shows the varying ways in which soldiers cope with the killing.  One says, “If you kill enough people, you get used to it…but I hate losing my men.”  Another says, “I was just doing my job” [in slicing Apaches from stem to stern].  “An eye for an eye; a tooth for a tooth”, is his mantra as he reads the Bible regularly to reassure himself.
Cooper is eloquent in showing men pushed to their limit, the ethical/moral dilemmas life presents, and—most heartening—men transformed by their experiences.  In Hostiles, we are captivated by Captain Blocker (Christian Bale in a stellar performance), who in the beginning sits patiently, but uncomfortably, when a trusted soldier under his command confesses to “Melancholia”, of which Capt. Blocker has no inkling.  That doesn’t mean he doesn’t care for this soldier—he values him—but depression?  That is not something he knows anything about.
Then he is assigned a task that is anathema to him—accompanying Apache chief Yellow Hawk (Studi) and his family to Montana, for burial at his birthplace.  The chief has cancer and is about to die, and the zeitgeist is turning toward being much more tolerant of the Indians.  President Harrison has ordered that the chief be accompanied by the U.S. military to Montana to assure his safe arrival.  Have you ever heard a silent scream?  That is Capt. Blocker’s response to the order, which he cannot refuse without jeopardizing his pension.
What kind of transformation can a person like Capt. Blocker make?  It takes two warring parties traveling together (ahem...plus a woman?) to “humanize” him.  This film is about the profound emotional experiences that such a man as Capt. Blocker undergoes that go from silent listening and grunts to real, tender, sharing moments he has with those around him.  You don’t often see a cowboy/soldier self-actualized, but Cooper achieves just that.
There are exemplary tender moments in this film, such as a simple “Thank you for your kindness” to a sympathetic laying of a hand on a person suffering in a tent, to a soulful “A part of me dies with you.”  The upshot is that Cooper understands so many aspects of men especially (not to entirely exclude women) and portrays them as few filmmakers have been able to do.
Christian Bale brings out the character of Capt. Blocker in a way that perhaps no one else could.  His award-worthy performance (after stellar roles in The Big Short, American Hustle, and two Dark Knight films) should be recognized.  Supporting roles are well covered by Rosamund Pike, Wes Studi, and Rory Cochrane, but this is really Bale’s tours de force.

If you want to see a western with heart and substance, this is it.

Posted by donnarcopeland at 10:04 AM