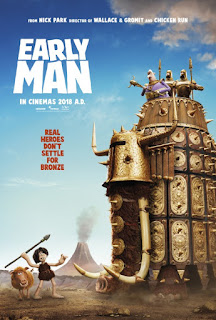 Nick Park and the Aardman Animation Studios bring us another enchanted story that entertains while it inspires hope and the achievement of dreams.  Dug (Redmayne) is an aspiring young man who tries to convince Bobnar (Spall), chief of the cavemen, that they should go beyond being a tribe of rabbit hunters and start searching for big mammoths instead. Unrealistic expectations, perhaps?  Bobnar indulges him by saying he will think about it, but in the meantime, Lord Nooth (Hiddleston), whose tribe has advanced to the Bronze Age and are deep into mining, is driving them out of their precious valley to get to the rich ore deposits lying beneath it.
Then an element of fanciful story telling is inserted into the drama.  Dug has found cave drawings that indicate that their ancestors played some kind of game with a ball similar to one he has stumbled upon near the mines.  (The “Bronzios” are the champion football team at the time).  Dug and his friends kick the ball around playfully for a time, but through strange coincidences they encounter someone who actually knows about the Bronze Age people’s game of football (soccer to Americans).  Who is this someone?  She is a girl(!) named Goona (Williams) who is barred from her people’s team because she is a girl.  But she is passionate about the sport and spends many hours watching the game and playing it in her imagination.  When she sees an opportunity to coach the cavemen and transform them into a disciplined team, she jumps at the chance to get back at the Bronzios who were never very nice to her.
Much excitement and intrigue follow when Dug negotiates with Lord Nooth to get back their land.  The outcome of these negotiations will be determined by the winner of a football game between the scrappy “Brutes” and the expert “Bronzios.”  (Lord Nooth is not being magnanimous; he plans to reap more entry fees at the gate from the cavemen.  Little does he know that his wife Queen Oofeefa will have a role to play in the contest.)
This movie is up to the quality of the famed “Wallace & Gromit” TV series and video games and The Curse of the Were-Rabbit and Chicken Run feature films, as well as other awarded productions by the same filmmakers.  It is beautifully animated and the story is full of humor, clever puns, and substance (story by Park, screenplay by Mark Burton and James Higginson.  An added bonus is that the story incorporates critical roles played by females—an issue close to our current political preoccupations.
The voices of Hiddleston, Williams, Redmayne, Spall, Brydon, Margolyes, and even Director Park himself fit perfectly with their characters.

From Nick Park and Aardman Animations fans, a new release à la “Wallace & Gromit”, The Curse of the Were Rabbit, and Chicken Run.

Grade:  A By Donna R. Copeland