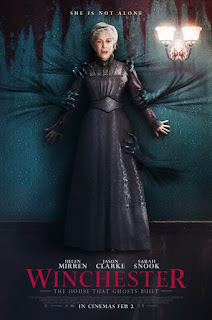 This work of horror and intrigue, co-written with Tom Vaughan by Directors Michael and Peter Spierig (identical twins born in Germany and working in Australia), does what such a picture is supposed to do—keep us on the edge of our seats, play into common fears about old mansions, and pull us into the world of spirits and ghosts as it tries to convince the character, Dr. Price (Clarke), that the spirits/ghosts are there for a cause and a purpose.
Dr. Price has been contracted by the board of the Winchester Company to evaluate the mental stability of Sarah Winchester (Mirren), heir and half-owner of the Company, out of their concern for the company’s solvency.  Is she still fit to be on the board?  She has been adding onto her mansion in San Jose, California, for years; construction goes on 24 hours a day.  She says the purpose of this work is to calm the spirits of all those who have been killed by Winchester guns.  Sarah is convinced that if she shows them remorse, they will be at peace and go on to a better place.  She builds a room for each of them until they get that peace, then they move on.  (Now, those who never get to a calm place must be locked away in their room with, specifically, 13 nails.)
Eric Price, a staunch empiricist, is quite prepared to consider Sarah delusional, even though eerie things begin to occur immediately after he arrives at the Winchester mansion—glimpses of strange figures flitting by, the bells tolling precisely at 12:00 every night, and of course unexplained noises at all times of day.  Once, when he goes to investigate, he peers through a door slightly ajar to see Sarah in a trance gazing upward, and sketching instructions for re-building that someone seems to be telepathically sending her.
Sarah has her trusted niece Marion (Snook) living in the house with her young son Henry (Scicluna-O’Prey), and he shows strange and even dangerous behaviors from time to time.  The question arises about whether he is cursed as a Winchester or simply showing signs of grief over the loss of his father.
As time goes on, the weirdness increases to a point that it looks like everyone and everything will be destroyed.
I think Winchester succeeds in what it is attempting to do in its genre, and beyond this, astute observations are made from time to time that give it more depth, such as making the point that sometimes real (i.e., personal) experience is more valuable than professional training.  It especially highlights the motivations that can result from guilt—Mrs. Winchester’s for the damage her gun company has done, and Price’s for his role in his deceased wife’s demise.  Just importantly, it shows how each is able to assuage guilt through action and/or taking a different perspective.
Helen Mirren’s artful portrayal of a woman with spirit, determination, self-confidence, and a little quirkiness is persuasive in drawing us into her world, just the way she draws in Clarke’s Price.  And he skillfully transitions from a grieving skeptic without a purpose in life to someone drawn in to more meaningful endeavors.  Snook, as the intensely loyal but thoughtful niece shows the bind her character gets into when she gets put between Winchester and Price.  Young Scicluna-O'Prey as Henry is alternately endearing and frightening, depending on whether he is a normal boy or caught up in a spirit’s machination.
I interviewed the Spierigs at the South by Southwest Film Festival in 2014 where their film Predestination, based on a Robert Heinlein story, premiered.  It has a complex plot, full of intrigue and social issues and, like this film, shows their creative thinking merging with social conscientiousness.  I was impressed with them then, and regard them as filmmakers who will advance the artfulness and thoughtfulness of films for years to come.

An intriguing horror film with a wonderful blend of history, biography, and fantasy.