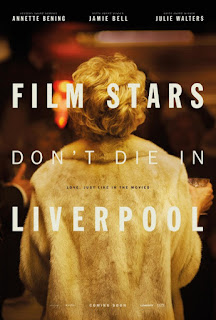 I am still waiting (how many years?) for filmmakers to portray the cancer experience in a realistic way.  For some reason (I have no idea why), they tend to romanticize it.  Beyond that, they often reinforce ways of coping that don’t help anyone (e.g., refusing treatment when first diagnosed, not informing family.  That being said, my comments are as follows.
The film is loosely based on the real life of Gloria Grahame (played here by Annette Bening in a fine performance), an American actress in the ‘40s and ‘50s who was known for her performances in It’s a Wonderful Life, The Bad and the Beautiful, Sudden Fear, Human Desire, and Oklahoma!  This film covers the period when her career is waning and she has concerns about her looks.  Her path crosses that of Peter Turner (Bell), a much younger man who becomes smitten with her.  They meet at his parents’ boarding house and her room is next to his.  Difference in age is not an important factor for him, and he adores her.
Gloria is the type of person who has always been adored, including by her mother (Redgrave), so she has a certain amount of self-entitlement and expectation that people around her will attend to her needs.  It’s interesting that when she becomes very ill, she doesn’t want her family to be informed.  Instead, she prefers to be cared for by Peter and his family, with whom she has become very close, perhaps because they are a more loving, helpful group than her own family.  We don’t see her four children, except her son, briefly, at the end.  There is a cameo of her mother played by Vanessa Redgrave and her sister (Frances Barber).  It would have been of value to know more about Gloria’s background and why she would prefer the company of her boyfriend’s family over hers, and more about what happened to her career.
The film, based on a memoir by the younger co-star, Peter Turner, is directed by Paul McGuigan.  It’s another case where the filmmakers choose to jump back and forth in time—which I’ve come to despise—and which makes it difficult to follow the stages of their relationship and the illness.
Both Annette Bening and Jamie Bell deliver fine acting performances, and there is believable chemistry between them.  Vanessa Redgrave is stellar in her cameo appearance as Grahame’s mother, quoting Shakespeare while sitting beside her snippy other daughter played by Frances Barber.  Julie Walters as Turner’s mother exudes her usual warmth and wit.

A famous aging film star on the decline captures the interest of a much younger man, and they make the most of their time together.