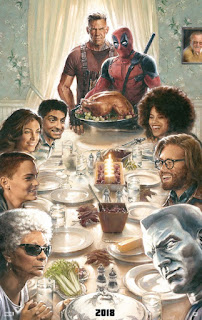 Deadpool is back, loaded with heroics, physically impossible altercations and gun battles, just as before in the first Deadpool, mixing in even more jokes and references to other movies.  He seems to be living a contented life with his beloved Vanessa (Baccarin), and they are discussing baby-making when his past re-emerges in a way that will make him do something that will plague him for all time to come.
Now, he is out for revenge, which lands him in jail (the “icebox” for mutant offenders), where he is paired with a mutant orphan (Russell, aka “Firefist”), who idolizes Deadpool and pleads for friendship, to no avail.  But after Deadpool has repeatedly rejected him, he learns more about him, and at Vanessa’s urging, decides to protect the orphan from two forces out to get him.  One is the abusive head of the reformatory where the child had been living; and the other, the formidable Cable (Brolin), a time-traveling super-hero from the future who is worried about what Firefist might do that could affect him in some way.  He serves as the new villain.
To go after these foes, Deadpool realizes he needs to form a band of warriors, which he will name X-Force.  Many apply for the job, some of which are Zeitgeist (Skarsgard), Bedlam (Crews), and Domino (Beetz).  The interviews of these characters are fun to see, not the least of which is Peter (Rob Delaney), who has no special talent and just comes along for the ride. Seeing their special powers in action provides additional entertainment.
The film, directed by David Leitch, a former stuntman who, as in Atomic Blonde, has created well choreographed fight scenes, does not really break new ground, and actually becomes tedious in its endless self-commentary staged battles, and endless references to other films. The fight I enjoyed most was on a hijacked urban train with Deadpool stopping Cable’s bullets with his twirling ninja swords.  Reynolds and Brolin are standouts in their respective roles of two distinctly different characters—one, a motor mouth who goes after bad guys, and the other a true villain without mercy.  The actor from New Zealand who plays Russell, Julian Dennison, first won international fame in Taika Waititi‘s Hunt for the Wilderpeople,  He is just as good here as in the previous film, and manages to steal your heart.
Tyler Bates’ music is a good part of the entertainment, as is Jonathan Sela’s cinematography.  When X-Force parachutes down into a city, the scene set against a bright blue sky, is humorously reminiscent of Magritte’s painting, “Golconda.”

Deadpool 2—not dead in the water, but a sequel only diehard Marvel fans will appreciate.