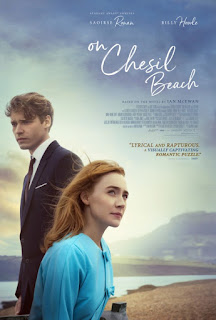 It’s the 1960’s in England, and Florence (Ronan) and Edward (Howle) have just met in a love-at-first-sight moment.  They joke with each other, have fun, and talk about things that are important to them.  She’s a classical musician and he is a history expert, but has a wealth of knowledge about the world around him.  They seem to have a lot in common despite their different backgrounds—hers upper class, his working class.  His father is headmaster at a school and his mother an artist, so they are educated, but she had a brain injury that has resulted in odd behavior.  Florence’s family is rather snobbish, so it takes a while before they can accept Edward.  But things are coming along; Florence loves Ed’s family and they love her.
The day comes for them to be married.  This is a very long day, but director Dominic Cooke breaks it up by interspersing scenes from their childhood and the early days of their courtship, which helps to make sense of what happens on their wedding day.  Their honeymoon is in a fine hotel on Chesil Beach, known for its distinctive rocks, which serves as a metaphor for the rocky time their relationship will have.
The book on which the film is based is by the acclaimed novelist, Ian McEwan, who wrote the script as well.  Many of his novels have been adapted to film, including Atonement, which won an Oscar.  His characters are well conceived, with psychological depth and a kind of realness that reminds us of people we know or can imagine.  That’s the strength of this film, along with the actors who play the main characters, Ronan and Howle.
Although the director has done well in many respects, the film sags in its lingering on Florence’s obsessiveness and need to be in control and to be controlled in her every move (thanks to an overly critical father), making the audience squirm and look at their watches.  Another drawback is the loud rock and roll/rhythm and blues blasts that occur during opening scenes and periodically throughout.  It frequently drowns out the dialog, and makes it stand out in a bad way.
But another strength of the film is its brilliant illustration of how important sex education is.  Although not unusual for the 60’s, these young people have not been taught the basics—either formally or informally—and your heart will go out to them in their pain and inability to express themselves or get any guidance.  A minister and a father offer their help, but the young people have been taught to suppress emotions and concerns, so can't discuss the issue.
Cinematographer Sean Bobbitt deserves praise for his camerawork, which captures the landscape contrasted with the emotional turmoil and shots that express so well the agitation and angst of the characters.  There has probably never been a wedding night scene quite like this one in film—although I have no doubt it has occurred too many times in real life.
Saoirse Ronan is a consummate actress skilled in playing young, cheeky characters; and here she demonstrates her skill in portraying a woman truly afraid. Billy Howle is newer to film, but shows up extremely well here in a complex character who is trying to integrate his aggression, tenderness, and competitive feelings, and develop patience.  He made the picture of humiliation and regret come alive on the screen.

Even today, this film might be relevant for couples considering marriage.