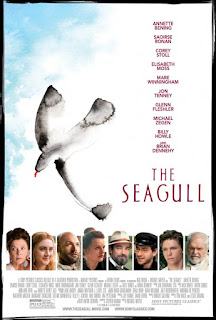 Unrequited love and artistic aspirations take center stage in this production based on Anton Chekhov’s play written at the end of the 19thCentury and performed onstage in the U.S. numerous times—a demonstration of its popularity. Director Michael Mayer indicated in an interview that he wanted to do a film version of the play, because it would allow audiences to get into the “soul” of the characters more than they could when it is performed onstage.
And what a mix of characters!  Annette Bening plays the role of Irina, a successful and still adored actress, who has come to rely on her success and popularity to the extent that she finds it difficult to empathize with troubles of those around her, even those of her son Konstantin (Howle).  He is an aspiring writer/producer of plays, struggling to make it in the world his mother has mastered.  To add insult to injury, she has bonded with Boris (Stoll), a successful writer who seems oblivious to what Konstantin is trying to achieve.  Konstantin finds himself consumed in jealousy, not knowing whether he can ever become as accomplished as either of them.
The action takes place at the summer home in the country owned by Irina’s brother (Dennehy), so the majority of the characters are local to that area. One of the locals is the daughter of a wealthy neighbor named Nina (Ronan), whom Konstantin adores.  But the daughter of the manager of his estate, Masha (Moss) is hopelessly in love with Konstantin. (She contributes much of the comedy in the film, snorting coke and gulping vodka while making statements like, [the reason I only wear black is that] “I’m in mourning for my life.”  [Actually, that may be another theme of the film:  mourning for one’s life as it has turned out.]  The one longing after Masha is a schoolteacher (Fleshler), who isn’t very smart, “but is a good man.”  When they meet at this vulnerable time, Nina becomes star-struck and smitten with Boris, Irina’s mate.
You can see, this is all set up to be a farce of shifting romantic liaisons; but it has more depth than that in its examination of art (idols are not necessarily to be worshipped and the issue of how much one is supposed to sacrifice human relationships for art); the challenge of continuing to pursue dreams and cope after rejection; and how much to “settle for” to have an intimate relationship.
The actors are the strength of The Seagull, with Bening securing her place as a star performer. Impressive as well is Saoirse Ronan, always right on, and especially in her delivery as an ingénue in the film’s play by Konstantin (If I didn’t know better, I would swear she had never acted before!).  Billy Howle plays the young tortured artist with skill and pathos.
The weakness lies in the film’s not being able to wrest itself from a staged performance.  It’s usually difficult to make this transition, and, unfortunately, this—along with other movies before it—does not succeed.  Why does this matter?  I’ve thought about it many times, and have concluded that seeing real actors onstage is very different from seeing actors in a film.             The former is more realistic because the actors are “real” people; whereas in a film, the reality shifts to a much broader field, all of which must be incorporated into the “realness.”  Plus, it also seems that actors deliver their lines very differently in a play vs. in a movie.
This is a film primarily for those who love classical theatre and plays.