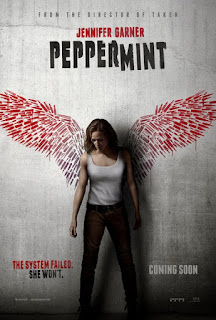 What a birthday when you and your mom are insulted by another mom in a parking lot, no one comes to your party, and your whole family is shot after a fun night at the carnival.  Your mom, Riley (Garner) does survive, however, and now there is hell to pay. This woman is angry!
But she will get angrier when the case comes to court, and the D.A. and the judge let the perpetrators, whom she has accurately identified, go free and send her off to the psychiatric hospital.  Yeah, “something’s rotten in Denmark.” But the powers that be haven’t the faintest idea of what Riley North is capable of.  She manages to avoid the hospital and disappears. Effectively.
When Riley does reappear, it is not the “simple” bank teller and nurturing mom everyone thought they knew.  Suddenly, people across the city are being killed mysteriously—not the good guys, but the bad guys who betrayed the Rileys.  She becomes a heroine on social media, especially when she does in the corrupt players in the justice system and the cartel-friendly crooks on Skid Row.  She's become a vigilante (and the movie could be faulted for glorifying this dubious role.)
If you ignore that fact, the story is exciting and holds your attention for the most part.  Jennifer Garner has appeared primarily in light fare, and seldom as the lead.  In the unfortunate Elektra as a female ninja, it got her nowhere, but she gets more of a chance to show her lead actress skills in Peppermint as an enraged woman who spends much time, attention, and careful planning to earn her super woman bona fides. The problem is, the story strains credulity when she disappears and suddenly returns as a completely different woman.  The filmmakers should have shown how she went around the world training to be the fighter she is shown to be in the last half of the movie, an expert shot, familiar with military grade weapons, and the ability to wipe out beefy goons who attack her physically.
So while I applaud the movie for highlighting a strong woman capable not only of admirable foresight and planning, but in execution as well, I find fault in its not making it more believable by showing how she achieved these capabilities.  These things don’t emerge simply from anger; as many who have trained diligently in gyms, shooting ranges, and intelligence will tell you; it takes drive, commitment, and time to become an expert in combat and counterintelligence.

For a different take on typical crime movies, you may find this a novel and exciting diversion.

Posted by donnarcopeland at 1:51 PM