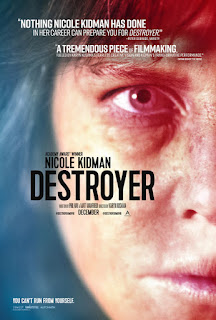 This is one of those films where you have to work hard just to keep up with the characters and the story, partly because Director Karyn Kusama chose to switch back and forth in time rather than tell the tale chronologically.  It’s a common practice I literally hate, and see no reason for it—except to make us work hard.  Perhaps filmmakers think it increases the mystery, because the viewer doesn’t have critical information until almost the end of the film. But that’s not a good reason.
Destroyer had the potential to be a fine thriller, but fails because of the above and because by the time critical information is given, it serves only to draw out the story and drag on and on when you just want it to end.
We’re thrown off base right away, when Detective Erin Bell (an almost unrecognizable Kidman) drags herself around a murder scene amidst the taunts of other detectives already there.  She spots significant clues, and goes to the police station to still more taunts.  She is the only one who could recognize some tell tale signs at the murder scene, but you won't know that this is the end of the movie, rather than the beginning of the story.
To avoid spoilers, I will refrain from going into the story at all.  Erin Bell is the focus and reason for the story and for the title itself.  She is a detective on the Los Angeles Police force, who has become persona non grata, and must endure taunts from all sides, including criminals and her own daughter.  We’re immediately curious about her history—which is a rich one—but must travel back and forth in time among a myriad of characters to learn about only a fraction of it.
Acting in this film is its strongest asset.  Award-winning Nicole Kidman (in three films just this year:  Destroyer, Boy Erased, and Aquaman plus television’s “Big Little Lies”) captures and sustains your attention throughout the film, which (in its disjointed way) is about who she is and part of how she came to be.  (I say “part”, because that’s all we get.)  Toby Kebbell and Bradley Whitford provide terrifying cameos that make you shiver, and Tatiana Maslany and Jade Pettyjohn play their roles of fleshing out the plot aptly.
There is so much potential for soul in this story, that it’s a crying shame the ones responsible seemed to miss their own point.  The tale of a sharp but discredited detective with a back-story who continues to persevere contains the makings of a moving human story; but this film is not the one to tell it.  The title itself proves the filmmakers’ absence of empathy and insight into the main character.

About plans gone wrong in so many ways.

Posted by donnarcopeland at 2:22 PM