THE MAN WHO KILLED HITLER AND THEN THE BIGFOOT 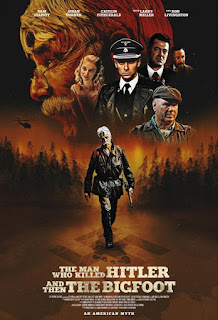 This is a charming (and sometimes tense) story about an eccentric old man with regrets. It’s striking, because many would call him a hero.  He eschews that appellation, saying that there were real heroes in WWII, and he was only doing what he was told to do.  This is a role made for Sam Elliott (playing Calvin Barr, a man of few words and deep thoughts), who draws out every conversation, every scene, as long as possible to instill maximum emotional impact.
Writer/director Robert D. Krzykowski has chosen to alternate back and forth between the experiences of the young Calvin, played by Aidan Turner, and older Calvin, played by Sam Elliott.  The younger has been undercover in the WWII Nazi military with a special mission, to kill Hitler.  The older Calvin lives in the same town, same house as the younger. But he has long been home from the war, still grieving the loss of his pre-war beloved (Caitlin FitzGerald).
Calvin now leads a solitary life, talking only to his bartender and his dog, but hardly to anyone else, even his brother Ed (Miller).  He seems like he is preparing to die (as in dumping all his meds in the trash) when he is visited by FBI agents asking him to go after the current “Bigfoot” in the Canada wild, who is infecting the civilized world with dread diseases—ones that trace their beginnings to the black plague in the 14thcentury—and ones to which he is immune.   (A little hokey is the stated fact that he is the “only one in the world capable of destroying this animal/human being.)
At first, he refuses; but this is a man who is still questioning his first “kill.” Yet, he is torn because of his position of being honorable in all things.  Will he go when he is called as an old man to fight yet another fight?  Or will he cling to his basic principles?
The film is engaging and entertaining, and Sam Elliott is mesmerizing (with Aidan Turner expertly and convincingly playing his younger self).  The plot is interesting and fanciful, yet it doesn’t quite hit that “sweet spot” where reality, fantasy, and inspiration come together.  Perhaps if the script were more plausible, it could have been more engaging as a fantasy. But as it stands, its remains interesting but not one that will stay with you.

A military fantasy that, however intriguing, lacks enough grounding in reality to be impressive.