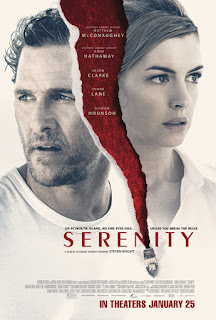 The complexity of the plot in Serenity (which is far from serene) hypes up the excitement and intrigue, and keeps you guessing throughout.  The theme of “What is real?” gives it an added boost in depth as the viewer is forced to ask the question over and over in terms of the plot, but also in terms of each of the characters and their minds—along with ethical questions that will arise.  It is the talented work of Writer/Director Steven Knight who has given us previous—sometimes quiet—thrillers, as in Dirty Pretty Things, Eastern Promises, andLocke, that stay on one’s mind after leaving the theater.
The story starts out as a simple tale about a fisherman who seems to be suffering from PTSD following his medal-earning service in Iraq, which he is self-treating with alcohol.  He is gruff and single-minded, seems to have no inkling about human management and relationships, and is compulsive about finding a certain tuna in the ocean that he has named “Justice” (which, like everything else in the film smolders with symbolic meaning).
Baker Dill (McConaughey)—not his real name, of course—is shown to run rough-shod over employees such as loyal Duke (Hounsou) and clients, every incident of which always gets spread through the town of Plymouth, where “everybody knows everything.”  And they do seem to know; the instance something happens everybody knows about it, even deals made supposedly in secret. There’s only one bar in town, which is part of the explanation, and a certain cat owner named Constance (Lane) has a perfect view of the dock from where all boats go to sea, but word also seems to travel mysteriously.
Some may get turned off by the occult references in the film, but, to me, that only adds to its intrigue.  It’s done so subtly (and some kinds of supernatural events have been accepted in some circles), and for substantive reasons (as in a father connecting with his son), I could easily accept it as part of the story. Besides, the ending is so ambiguous in terms of what really happened, it’s one of those delightful films where you can pick the ending you favor.  Either it’s a fantasy of someone’s mind, or it’s a realistic account of what happened.  The capper for these thoughts is Baker’s comment about a telephone call he’s just had:  “I didn’t have enough coins to get in that conversation” [about what was real].
McConaughey is in his usual form, capturing a character central to the plot of a movie. Here again, he confirms his status as a top-notch actor.  His movies vary considerably in quality, but in Serenity, he has chosen a role within a plot that is both complex and airtight.  The rest of the cast measures up to the task of characters who are presented as strong and convincing:  Anne Hathaway as the somewhat mysterious element of Baker’s/John’s past whose presence unnerves him; Djmon Hounsou as the one Baker asks to be his conscience, but intermittently dismisses; Jason Clarke as a thoroughly reprehensible husband; Jeremy Strong as an ambiguous figure offering an ambiguous bargain; Diane Lane as an important grounding connection for Baker; and finally, young Rafael Sayegh as Patrick, an elusive game-inventor-player who may or may not be real.

A delightful and thrilling exploration into reality/fantasy possibilities and the questioning of the rules of the game.

Posted by donnarcopeland at 11:33 AM