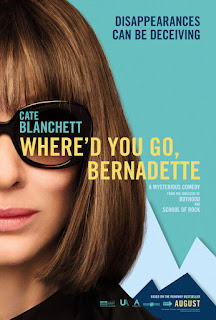 For a fun and rewarding experience, Bernadette fulfills the promise that most Richard Linklater films do. It’s about marriage, parenting, and family, but branches out further into “kookiness”, self-actualization, neighbor relations, and adventure, and with some scenes shown against the breath-taking seascapes for which Antarctica is famous.  Along with the seascapes, there are wonderful Escher-like shots that are meant to disorient the viewer, compliments of cinematographer Shane F. Kelly (A Scanner Darkly, Boyhood).
The first half of the story is a bit unnerving, with Bernadette (Blanchett) at her most manic, alternating between being a comedian and a complete nut job. Her husband Elgie (Crudup), a Microsoft techie, adored her initially when she had just won a “genius” award for architecture, but now seems incomprehensible of her frantic leaps in everyday living.  They have a daughter Becky (Bellisaro), who is very mature and astute at the young age of 12, and it’s clear that she has a closer relationship with her mother than her father.
After visits with a psychiatrist (Greer) and an FBI agent (Urbaniak), Elgie tries to make things right, but he is not fast enough:  Bernadette has disappeared.  And this will not be the first and only time. Intrigued?  You should be.
Linklater has a knack for bringing in the viewer as if he/she is a part of the family.  We identify with Bernadette and her need for privacy and alone time, with Elgie’s befuddlement/attraction to her, and the child Becky’s better understanding of the adults than they do of themselves.  All this brings the story alive for us, and we become invested in the outcome.
Cate Blanchett is a wonder to behold as an actress who can mesmerize while bringing home the truths of her characters.  In this case, she plays to Billy Crudup’s strengths as an actor who lives in his character to best advantage.  Kristen Wiig is perfect as a locally admired mother who, like Elgie, is mystified by women going against type.  Wiig has a way of bringing authenticity to her characters in a way that makes us laugh and cry at the same time.  This must be Trojan Bellisaro’s break-away moment playing an astute teenager who is thoughtful, loving, and perceptive to its best advantage.  I’m sure we’ll be hearing more about her in the years to come.

An award-worthy picture of contemporary personal/family drama that propels us forward.

Posted by donnarcopeland at 9:03 PM