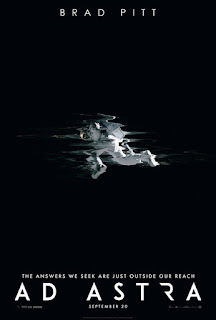 A space journey.  And what a journey. Ad Astra is a captivating experience both in terms of travel in space and in the distinctly human journey its main character, Roy McBride, undergoes.  This may be one of Brad Pitt’s most significant roles, even given so many others such as Moneyball, Inglorious Basterds, and Fight Club.  Here, on “mental health exams” given to him by the U.S. Space Command, he reflects on himself and what has happened to him in his life in an honest, forthright manner that allows us to see him as a real person, a committed, sometimes troubled man with doubts and fears.  Yet, he has a reputation for being the coolest of cool in any emergency, and we will see that manifested brilliantly in the course of the film.
The ways in which space travel is presented by the filmmakers becomes so realistic the sense of being out there remains long after leaving the theater.  Directors James Gray, cinematographer Hoyte Van Hoytema, production designer Kevin Thompson and their crews portray so vividly the atmosphere, the views, the instrumentation, and the tumbling/floating/falling that are inherent in space travel, afterwards, you really feel like you’ve been there.
The story is interesting, pulling in themes of father-son relationships, government policies and projects, military command hierarchies, and conspiracy issues. Roy McBride has become an astronaut following in the steps of his heroic father Clifford McBride, head of U.S. Space Command’s Lima Project, but who has been missing for years.  Roy assumes he is dead.
But when the Space Agency discovers that Clifford may be alive, it calls on him to go on a mission to find his father.  The concern is that he may be responsible for the majorly disruptive, unpredictable global power surges currently wreaking havoc in the world. Roy is ambivalent for personal reasons (he has a hard time seeing his heroic father as a rogue), as well as evidentiary.  His doubts are based on what he knows about his father and the weak evidence against Clifford presented by the agency.  Roy feels sometimes that he is being “pulled down the same dark hole” as his father.  Not only Roy, but the viewer too is likely to wonder about the evidence.  It suggests that Clifford has become a megalomaniac who has gone off the deep end.  But the evidence presented seems very slim.
Despite his misgivings, Roy is dogged in following the command given to him. In the process, he has to make difficult decisions and potential sacrifices—not only those of his own, but those of others as well—to resolve the problem he was presented with. Some of these are the nail-biting episodes where life and death are in the balance.

This is a story where the hero takes things into his own hands and makes something of them, gleaning hard facts and drawing insightful conclusions from what he learns.