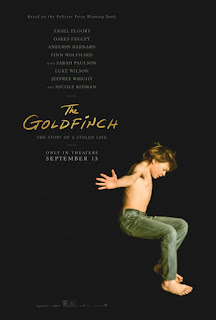 This movie is full of surprises, most of which I loved.  Above all, the characters fascinate the viewer while the rest of the cast seem to take them all in stride, a kind of lesson in acceptance.  Storytelling hits that sweet spot in which information comes through gradually, punctuated by significant details, but giving one time to savor the plot.  The central character, Theodore (beautifully rendered by Oakes Fegley playing the younger and Ansel Elgort the older Theo), reminds of “Baby” in Baby Driver (also played by Elgort), actors able to convey mystery as they become endearing and grow on their acquaintances.
The story begins with tragedy, when Theo’s mother is missing after an explosion in New York’s Metropolitan Museum of Art.   His alcoholic father disappeared long ago, so he needs someone to take him in.  When he names the mother of a classmate whom he has befriended, as at least a temporary solution, Mrs. Barbour (Kidman) steps up to the plate and brings him to her family, which is both wealthy and dysfunctional.  She ends up really caring about him, and it looks like he may be with them for a long time.
But… (This story is filled with twists and turns, continually bringing up questions about coincidences versus fate/predetermination).  That juxtaposition is one of the themes of the film, coupled with questions about what is fake and what is real, both in relation to art as well as in human relationships as portrayed.
The movie Goldfinch is mesmerizing during Theo’s growing-up years when we observe him to be so well balanced and well behaved, managing his losses and compensating for them in healthy ways.  It gives us a realistic picture of trauma (in other characters as well as Theo), its after-effects, and how people manage it.  The characters introduced make the story come alive, such as different family members in the Barbour family, Hobie (Wright) who takes Theo under his wing and educates him about artistic furniture and reproductions, and the reappearing father (Wilson) and his girlfriend (Paulson) who whisk him off to sandy, bleak Las Vegas.
Unfortunately, the film loses its way and tries to become a thriller toward the end, with drug dealing, mobsters, and other unsavory characters introduced into the mix.  This is where it lost me, although I did appreciate attempts to show all the characters to be a mixture of good and bad qualities, most of which with good intentions; but the ending was just too fantastical for me to go along with it.
For the most part, director John Crowley, the actors, cinematographer Roger Deakins and composer Trevor Gureckis have created a beautiful work of art, capturing the qualities of the Goldfinch painting and its history, while prompting us to consider different philosophies of life.

A captivating story with meaningful characters, derailed by superfluous drama seemingly “tacked on” toward the end.