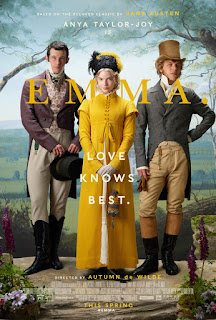 Based on a novel by Jane Austen and set in the nineteenth century in England, Emma. is a view mostly of the upper class. The character Emma (Taylor-Joy) embodies the period as a highly admired lady of the town who has been so indulged she comes across as superficial and vain.  Yet she fancies herself such a good judge of others’ character, she rushes into matching her friends up with one another.  Not only does she introduce them, but takes an active role in furthering their romantic relationships.
As one would expect, Emma makes some fateful mistakes along the way, misjudging who will be with whom.  Much of the story plays out like an English country dance with constantly changing partners.  That is, we see presumed partners through Emma’s eyes—until reality overcomes fantasy and all is settled in the end.  The one most surprised will be Emma herself.
Emma. is so well cast, it becomes the film’s strongest asset, helping keep such a mannered story from becoming rather boring to the modern eye.  Taylor-Joy is beautiful and captures Emma’s personality in its mixture of well-intentioned kindness and condescension that stems from over-protection and indulgence.  Still, she maintains an aura of authority in her role as mistress of her father’s house.
Co-starring with Taylor-Joy is Johnny Flynn (as George Knightley), the epitome of a gentleman.  Knightley owns a manor brimming with fine art, but is sensitive and always kind and merciful. A neighbor and in-law of Emma and her father, he sees them daily and is Emma’s only critic.  Flynn is perfect for the role in his looks (not so handsome he becomes suspect) and his low-key, personable manner.
Other prominent roles are carried by Mia Goth as Harriet, a naïve young woman Emma has decided to take under her wing to “make a lady” of her; Rupert Graves (as Mr. Weston) is an appealing “Mr. Nice Guy”, who is social and charming; Bill Nighy as Emma’s hypochondriacal father proves again his effectiveness in being a character actor; and Amber Anderson as the mysterious Jane Fairfax attracts the eye and plays the piano with flourish (Anderson is an accomplished pianist as well as an actor).
For me, the music provided by David Schweitzer and Isobel Waller-Bridge (composer for “Fleabag” and sister of Phoebe Waller-Bridge) is a high point, coming in unexpectedly at times, religious choral music at other times, and lyrically sweet songs, such as the duet by Jane Fairfax and Johnny Flynn, “The Last Rose of Summer.”
I don’t think we really needed another remake of Emma, but director Autumn de Wilde and screenwriter Eleanor Catton have produced a worthy rendition of the Jane Austen classic.  Lovers of Austen’s work will likely be pleased with this update.  Others will not be so impressed.

Emma. is worthy of your attention if you are drawn to period pieces.

Posted by donnarcopeland at 8:27 AM