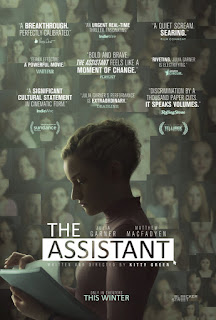 In interviews, Kitty Green, the writer/director of The Assistant, states that her intent is to point out systemic issues within the entertainment industry where so many seem to turn a blind eye to abuse and exploitation.  She doesn’t focus on one perpetrator (for instance, we never see the boss; we only overhear him on the phone berating his employees), but instead shows the experience of a young college graduate (played by Julia Garner) hired to be a production assistant for a powerful executive. One way she illustrates her point, I think, is naming the woman a generic “Jane” and, as I recall, not having that name spoken once in the movie by other characters (primarily men).
Another way is to show in detail the assistant’s tasks for one day, which slows down the action considerably to the point of being rather boring.  For the first hour, we primarily see her typing, reading or listening to instructions, opening mail, tidying up, arranging for transportation and accommodations for her boss, and not much else.  Garner manages to keep the viewer interested with her ability to show depth of character nonverbally and portray a sense that something is about to happen.
Although Green’s points come across very well, it’s hard to imagine a job in film production involving primarily secretarial and housekeeping chores. Especially since Jane is told numerous times that her work is good, that her boss is aware of how hard she works, and that she has a great future in the company.  But we never see her doing anything that is related to production training.  The other two assistants (male) seem to have more elevated tasks, although their work seems mostly to be on the telephone.
Another aspect of the film that lacked believability to me is that Jane is a graduate of Northwestern University with a 3.8 GPA.  She’s timid, doesn’t stand up for herself, and constantly apologizes.  It’s easy to see why she’s being eaten alive in a cutthroat industry.  But that surely is not typical of a female Northwestern graduate.  I adored Julia Garner’s cheeky, brash character in Netflix’s Ozark, and it’s a bit of a letdown to see her in this role as someone unable to speak her mind.
Overall, though, the film aptly portrays the “culture of silence” that typically exists in an abusive industry, and Green is quick to say it extends far beyond the business of entertainment.  She purposefully made a “quiet” film to illustrate her point; however, this became a drawback to me, and it would have helped the film to have a bit of drama inserted here and there.

An apt illustration of systemic characteristics in a production company dominated by an overly aggressive, entitled male.

Posted by donnarcopeland at 9:38 AM