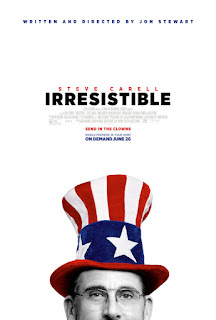 Jon Stewart (writer, director, producer) is at his best in comedy mixed with high drama, while ultimately making killer points about issues within a larger scope. Fine acting from the principal players makes it all work.
The scene opens in a small town in Wisconsin that has lost its main industry and is dying.  The mayor and other city leaders have a proposal that appears not to be in the interest of the town of Deerlaken or its citizens.  The measure has almost passed when in strides local farmer Jack Hastings (Cooper) with a passionate argument against it.  However, he appears not to be making much headway with the leaders or the townspeople.
When Democratic political consultant Gary Zimmer (Carell) hears about the situation and Hastings, he has the bright idea to shape Hastings into becoming a mayoral candidate in the upcoming election, who is confident he can “turn” Jack and the whole Republican town into Democrats.
Gary’s colleagues are extremely skeptical, but he has such confidence in his judgment and skills, he takes off for Deerlaken with high hopes, only to be consistently shocked by the nature of a small town versus a city like Washington D. C. (Example:  He only has to order lunch at the local watering hole, and meet a couple of people, for everyone he meets immediately after to know him by his new nickname, “D. C. Gary”, and he is greeted by everyone he meets as if they’ve known him forever.)
Gary is successful in convincing Jack to run as a Democrat, and the campaign forges ahead.  There will be jolting upsets when Gary’s archrival, Republican Faith Brewster (Byrne), hears what he is up to and likewise descends upon Deerlaken.  But she is supporting the re-election of the mayor (Brent Sexton), backed by big bucks.  This, of course, results in Gary intensifying his fund-raising efforts.  The subsequent no-holds-barred rivalry of the two serves as part of the production’s entertainment.
Chris Cooper is ideal as a countrified character with an “aw-shucks” attitude overlaying a canny, strategic mind, and his background includes being a war veteran.  Gary sees that the principles underlying his arguments adhere perfectly with explicit aims of the Democratic Party.  A widower, Jack has a grown daughter Diana (Davis), who is devoted to her father, and enthusiastically joins his campaign.
The odds favor first one campaign then the other, with Faith shown to be a ball-busting flirt without principles and Gary handing it right back to her and gradually increasing his edge.  But as time goes on, the two factions are portrayed more even-handedly, and the viewer is shown more clearly the source of the problem.  Nice wrap-up!  But since I think the very ending is surprising and masterful, I won’t reveal more than that.
I have sorely missed Jon Stewart’s Daily Show on the Comedy Channel, so was highly gratified with many of the lines appearing throughout the film that are signature for him and truly funny and provocative, e.g., “Good people have to do s----- things in service of the greater good” and “We’re spending to start something; they’re spending to stop something.”      More substantively, Jon interviews Trevor Potter (whom I became acquainted with on the Steven Colbert Report show), former Chairman of the Federal Election Commission and current President of Campaign Legal Center stating how it is legal to hide billions of donations to a campaign that later can be diverted to other projects.  Thank you, Supreme Court, for the Citizens United ruling.

For political enthusiasts, this film hits home in the most delightful ways—all to make a provocative statement about the United States today.