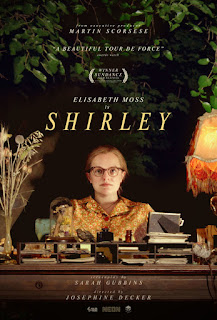 Based on a novel written by Susan Scarf Merrrell about the horror/mystery writer Susan Jackson, this film portrays the underside of the lives of women finding themselves trapped in what appears to be an inescapable situation and the ambivalent relationships that develop as a result between women and between men and women.  It’s complicated and mysterious, yet leaves the viewer in thoughtful reverie afterwards.  I was mostly repelled by the characters at first (that’s why I use the word ‘underside’), but as the story progresses they become more likeable and people whom I could identify with, at least to some extent.  For instance, I think any woman who during some of her life has been “just a housewife” (wifey), will quickly understand Rose Nemser—and to some extent Shirley herself, both women caught in dominating relationships.
Rose (Young) is newly married to Fred (Lerman), and they are anticipating their move to a college town, he with bright prospects in academia, and she hoping to return to college when they’ve established themselves.  They are greeted effusively by Stanley (Stuhlberg), Fred’s professor, who has offered to put them up at his house when they first arrive.  A raucous party is underway when the young couple arrives, which is somewhat confusing, especially when Stanley offers room and board for them if they will do him a favor:  Cooking, cleaning, and looking after his frail wife Shirley (Moss).  Of course, we are all aware this means that Rose will be the one taking on that burden.
Rose has a shattering first encounter with Shirley as she is ascending rather shakily up the stairs to go to bed while the party is in full swing.  Shirley’s uncannily perceptive and caustic comments send Rose into a spin.  But later, discussing it with Fred, he makes it clear that his position with the professor and the potential it holds for his career should take precedence—which it does, of course.
Two couples living under the same roof is always a tricky situation, especially when they’re newly acquainted, so we are immediately intrigued about what is going to transpire.  And we will find that it takes us straight into the horror genre.
The older couple in their individual ways exert cruel demands on the young couple who are trying their best to succeed.  Double binds abound, and we can admire (mostly) how Rose and Fred accommodate. It’s just that they are no match for old hands at the trade.
The strengths of Shirley lie in the source material (Shirley Jackson’s work and Susan Scarf Merrell’s novel), the script (Sarah Gubbins), and the actors, all knowingly assembled by Director Josephine Decker (Madeline’s Madeline, Collective: Unconscious).  All of these elements combine to capture your interest—sometimes in curiosity, sometimes in horror, and sometimes in something disturbing that you might not understand.  This is enhanced by the casting of look-alike Young to play someone closely linked to Susan, played by Moss.  I’m sure it was intentional on Decker’s part, to highlight author Susan’s linking the subject of her novel to the real woman, Rose, who was caring for her.
This is another in a long line of coups for Elisabeth Moss (“Mad Men”, “The Handmaid’s Tale”, “Top of the Lake”), for which she should have won more awards. Here, she sinks her teeth into a role that displays a completely different character from the others she has played and nails it—as she always does.  Supporting her, Odessa Young and Michael Stuhlberg bring their considerable talent to bear in character elucidation of those held in her thrall.

Perhaps not a movie you will “enjoy”, but one that will shed light on female-female and female-male relationships in our recent past—and perhaps, even today.