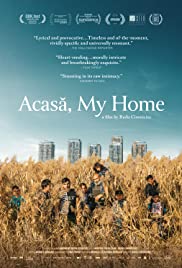 Gica Enache has been living on a small island in a nature preserve outside the city of Bucharest for 18 years.  During that time, he has acquired a wife and nine children, and they continue to live in a homemade shack.  The oldest boy Vali goes out and catches fish, some of which they eat, and some of which he sells to townspeople across a freeway and a river.  The family does other things to get money—selling throwaway bottles, plastic, etc, and they are good at rummaging through garbage to meet their other needs.  They have a stable social system that appears to work for them.    No one seems to be unhappy.

City officials have visited the Enaches a number of times, trying to get them to send the children to school, but the family takes to hiding the children when they see officials coming, and are able to get by with it until the city decides to declare formally their intention to convert the preserve into a city park.  Although Gica and his wife still try to resist, they are moved to city housing and the children are enrolled in school.  The children accommodate to the circumstances and seem to thrive. But Gica continues to dream about returning to their original place and keeping his children with him, even when his wife Niculina is opposed to it.

The film by Radu Clorniciuc (producer, director, co-cinematographer) charts this journey of the Enache family from nature into the city, and shows the difficulties they and city officials encounter in the process of “civilizing” them for a good cause.  The story is well told in that we the viewers are torn between rooting for a very appealing, although old-fashioned family, and city officials who have a good argument for creating an ecological space for residents to visit and enjoy…and believe that children should go to school.     We get to see the oldest son’s perspective on being deprived of an education after he has tasted civilization, and it with other family members’ perspectives make a strong coda to the film.

An unusual story about how Romanian gypsies living in nature might be introduced to the civilized world.

Posted by donnarcopeland at 7:36 PM