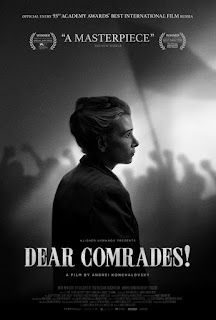 This is a brilliant example of how blood bonds are stronger than any ideology.  Lyuda (Vysotskaya) is a dyed in the wool Stalinist who advocates against the people in the factories striking in protest of increasingly stringent policies set by the Khrushchev government.  In her role as head of the production sector on the City Committee of Novocherkassk, she resolutely condemns them, saying they should be tried and severely punished.  She has no sympathy for the clamoring crowds outside a grocery that she must shove through to get to an ally who will supply her with what she needs, and a few luxuries to boot.

When the uprising spreads throughout the country and multiple factories join a huge strike, chaos breaks out.  And of course, as the crowds burst forward in the thousands, all Americans will be reminded of our own so very recent January 6, when Donald Trump’s followers stormed the capitol.  But fortunately for us, our January 6 dwarfed that of the USSR’s June 2, 1962, uprising when Red Army soldiers and KGB Snipers shoot guns at their own people, killing 25 and injuring 80.  In the hasty planning to address the strike, there are a few soldiers reminding government officials about the proscription of the military taking arms against the USSR’s own people, but with top leaders ordering the military to shoot, that’s what they do.  And above all the whole incident needs to be covered up.

So what about Lyuda during this time?  She has had a stormy disagreement with her daughter Svetka (Burova), who she fears has joined the protestors.  Their tiff ends up in dinner plates thrown to the floor and Svetka storming out of the house.  But Lyuda has her own problems to deal with, and concentrates on them, some of which test her loyalties and make her question her commitments—for perhaps the first time.  The government is adamant about keeping the rebellion quiet, to the extent it requires everyone questioned to vow they will not speak of anything they saw or heard during that time.

As all of the elements sift down, Lyuda comes to the realization of how much her daughter means to her.  But where is Svetka?  In a surprising alliance with a KGB officer, Viktor (Gusev), Lyuda searches, following any lead that comes her way.

Dear Comrades is characteristic of Russian movies that pit ideological systems and historic factions against one another, having all of the sturm und drang of political unrest vying against passionate love.  This feature by Andrey Konchalovskiy pulls us through a drama that will ring true in many ears.  Yuliya Vysotskaya and Andrey Gusev as Viktor the KGB agent supremely evince their characters, and the chemistry between them is right on in its initial guardedness that eventually shows their magnetic appreciation of one another.

An intriguing drama occurring during a Soviet uprising in 1962 that hurtles characters against one another, and demonstrates the power of an authoritarian state over its citizens.

Posted by donnarcopeland at 2:42 PM