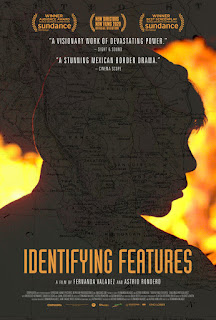 A beautifully artistic rendition of brutality along the trail of Mexicans traveling to make it across the border into the U.S.  Artistry of the film involves using reality-based truths and magical-realism to comment on a culture adrift, trying to comprehend and understand immigration.  The all-female group of filmmakers (director and co-writer with Astrid Rondero, Fernanda Valadez, cinematographer Claudia Becerril Bulos, and musician Clarice Jensen) managed to win awards at the Sundance Film Festival and others for their superior work in telling a story, filming it with scenes looking at first like modern paintings, then merging into the story’s realism.

Suspense is key in the telling.  The characters are not identified right away, events are presented laden with mystery, and although the dialog is mostly in Spanish with English subtitles, some of it is spoken in an Indian language.  The latter account is shown in pictures later for the viewer to interpret.

Certainly the topic of immigration is familiar to all of us at this point in time and we hear all kinds of stories about what might happen to migrants, but the way the story is told here encompasses the real emotional turmoil, along with general cultural statements.  It’s largely different from other stories about immigration, particularly in its focus on a smart and loving provincial mother and her unexpected connection with a young deportee from the United States.

In a nutshell, two mothers are trying to find out what has happened to their teenage sons who left Guanajuato two months earlier to try to go to Arizona to one’s uncle who had a job for them.       When the mothers don’t hear from them, one (Mercedes Hernandez in a nuanced performance) proceeds to re-trace the sons’ steps, which include a bus ride to the border.  Gratifyingly, along the way, she encounters numerous helpful, sympathetic people from all walks of life (all Mexicans) to guide her.

The two main characters are played by relatively inexperienced actors (Hernandez and Illescas) skilled in winning our sympathies and so appealing we really care about them by the end.  Their difficult, brief journey is marked by their instant identification with one another and polite helpfulness.  When the film edges into magical-realism toward the end, it falters a bit; but doesn’t make us forget the quality of the work as a whole.

First-time director of a feature, Fernanda Valadez, shows great promise and aesthetic flair in Identifying Features, which makes me and others anticipate viewing her work in the future.

The artistry of the film involves using reality-based truths and magical-realism to comment on a culture adrift, trying to comprehend and understand immigration.