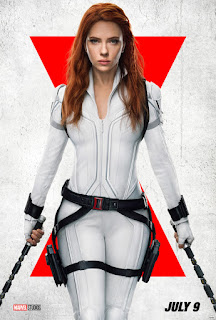 Noteworthy in this Marvel action film is the “woman’s touch” in directing.  We get a spoof on families, along with its dark side, the bonds of sisterly affection, and loyalty among females in general, even though the female characters are just as ferocious as the men.  The Australian writer and film director Cate Shortland has a short resume of films she has written/directed, but they are well represented in the awards world (c.f., Somersault, Lore, Berlin Syndrome) at this stage of her career.

Black Widow 2021 is a prequel, showing Natasha Romanoff (Johansson) and Yelena Belova (Pugh) as children of Melina Vostokoff (Weisz) and Alexei Shostakov (Harbous) living as a happy family in Ohio.  When Alexei arrives home one evening, he tells Melina they must flee within the hour.  That’s when the girls learn that they have major roles to play in a world drama.

Jump ahead twenty-one years, after the family has been broken up.  Natasha is on her own and literally bumps into (read major skirmish) Yelena, whom she recruits to join her in fighting a dangerous conspiracy afoot directed by Dreykov (Winstone).  In their efforts, they reconnect with Alexei (the Red Guardian), springing him from prison, and Melina who now has a pig farm, but is still intimately connected to the Red Room and Dreykov.

What follows are numerous scenes of death-defying battles, some fought from airplanes and helicopters, which constitute a marvel (pun intended) of CGI and other special effects, with characters from Natasha’s past continuing to pop up.  Warmly amusing in all these scenes, Natasha expresses concern and apologizes or tries to restore their health and well-being.  For whatever reason, the filmmakers want to portray her as caring in the end, particularly as a “big sister” to Belova.

We get to see the real villain in the course of Natasha’s efforts to stem the conspiracy.  It’s truly horrific, as scene after scene unfolds showing the most inhumane actions, and of course a push for world-dominance.

The two female actors, Johansson and Pugh, are clearly up to the job of starring in an action film, not only in their ability to portray the ultimate in toughness and brawn, but also in their gift for verbal jabs and playfulness in even the most harrowing scenes.  Rachel Weisz admirably embodies a nurturing figure and technical genius all in the same person (another strong point of the film).  Noticeable too is David Harbour as protective father, Incredibly strong man, and lovable dufus in his many manifestations.

I enjoyed this more than most action films for its cleverness, underlying ethics, and filmmaking skill in general. Although I tire of the repeated and seemingly endless preposterous battles, I still enjoyed this film.

The back story of the Black Widows—and a side of Natasha—we haven’t seen before.