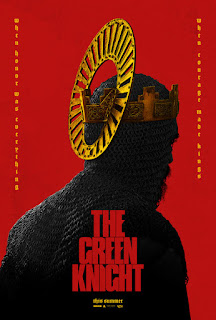 Based on a poem written in the 14th Century by an unknown author, Sir Gawain and the Green Knight has been an intriguing story ever since.  Writer/director David Lowery in the third retelling of it in film enhances its mysteriousness by making the screen very dark, by accompanying it with choral music rendered in Middle Ages verse (with accents of dissonant modern music) composed by frequent Lowery collaborator Daniel Hart; and by a heavy dose of symbolism.

It helps in understanding this film if one has read the poem and is familiar with the story.  I had not, so was mystified during many scenes until afterwards, when a colleague referred me to the myth.

Close to the appointed day, Gawain sets off on the journey to honor his pledge.  Of course, along the way, he will encounter many travails and tests of his strength and commitment.  Among them are bandits who steal his horse, his sword, and a sash his mother gave him to keep him safe, then they tied him up and left him to rot.  He encounters a woman who literally lost her head, which is at the bottom of a spring.  (This is only part of the magic sprinkled in throughout the story; that is, she is talking to him with her head attached, but still wants to retrieve her head).  He also meets a Lord (Edgerton) and his Lady (Vikander plays two roles, this one and the woman he is in love with at home).  The Lord proposes a bargain (a theme in the tale) wherein he will bring Gawain all the spoils of his daily hunts, and Gawain is to give to the Lord what he gained during the day.

After much of what Gawain lost during his travails is restored, often magically, he finally arrives at the Green Knight’s home, ready to honor his pledge.

Although well done in many respects, The Green Knight will appeal primarily to those interested in fantasy and in literature of days gone by.  I found the dark screen and often unintelligible dialog and choral words tedious, despite my interest in the story.  A confusing aspect added by Lowery is that Gawain’s mother gives him a sash for protection before he leaves on his journey, and his local love Esse gives him a ring.  On his journey when he meets the Lord’s lady (also played by Vikander) she as well gives him these two items.

Dev Patel, Alicia Vikander, Joel Edgerton, and Ralph Ineson are superb in their roles, always a joy to watch.

Better read some background on this story so as to derive full benefit of its entertainment value.

Posted by donnarcopeland at 9:48 AM