I CARRY YOU WITH ME 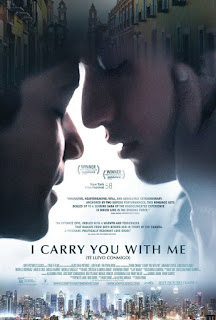 A tender reminiscence about a Mexican man trying to fulfill his dreams in America after he suffers prejudice and heartbreak in his hometown of Puebla.  Of course, he discovers through the years that he must deal with something similar in the U.S., but it is different enough that he is able to accommodate and make his way toward fulfilling his dreams.  It’s hard to say if his life would have turned out another way if he hadn’t gotten one of the best surprises of his life after years of being here, but the film has a greater interest in helping us learn about and identify with the immigrant’s experience, and the tremendous pulls toward staying in the new country versus moving back to the old one.

Flashbacks are used effectively to show us Ivan’s (Espitia) and Gerardo’s (Vazquez) memories of the past, both in Mexico and in the US.  Just as in real life, these memories pop up at unexpected moments, illuminating whatever is going on at the time.  Rather surprisingly, this is the first feature for director Heidi Ewing, whose past work is in documentaries about people needing to adjust to changing circumstances (The Boys of Baraka, Jesus Camp, Detropia).  She has a keen eye for points in a story that have universal as well as personal appeal, which makes this transition logical and impactful.

Ewing has some advantage in helping the film achieve a real-life quality.  The two figures on whom the story is based are her personal friends with story-worthy lives.  But Ewing went further in being rather daring; she filmed the real people as the two friends in their present-day ages/lives.  This will not be noticeable to most viewers, although some will catch it when the credits come onscreen.

The actors seen for most of the movie are well cast, showing major differences in the personalities and backgrounds of the characters.  Ivan is the most sentimental of the three, Gerardo the most practical, and Sandra (Rodriguez) a cross between the two in her capacity for sympathy and understanding, although lacking foresight in making major life decisions.  The pulls back and forth between the U.S. and Mexico are very different for each of them.

This is a welcome addition to the genre of immigration experiences, and is likely applicable to people from any country who have come to the U.S. undercover.  I doubt that many of us think much about all the people who serve us when we go to restaurants, and all the stories they could tell if we asked them.

A captivating story about two immigrants who find the strategies required for subterfuge bear similarities in both countries.