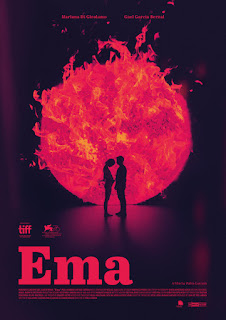 This is a completely different movie from Chilean Director Pablo Larrain as compared to his earlier success most Americans are familiar with—Jackie—about Jacqueline Kennedy.  But he is an award-nominated/winning filmmaker for films with wide-ranging subjects, most with a Chilean political subject (No, El Club, Neruda).  He is even directing eight episodes of the current running TV series of “Lisey’s Story”, a thriller based on Stephen King’s work.  I have always admired his work, but do not know quite what to make of this his latest film.

Ema is primarily a story about a dancer (captivatingly played by De Girolamo) who is married to the choreographer of her company, Gaston (Bernal).  They adopt a child after finding that Gaston is infertile.  Although it’s not shown to any great extent in the movie, the child does something horrible that makes the couple decide to send him back to the adoption agency.

Thereafter, come the typical recriminations and accusations of the would-be parents toward each other.  It looks like they are going to split up because of it, and Ema proceeds to make her own way in the world, although she still dances in the company.  The story shows the varying ways people cope with tragedy, using others to guide and help them adjust.  The two characters sleep around—he a little—she, a lot.  She has a mesmerizing quality that attracts both men and women.

How she decides ultimately to resolve her problems will likely be a shocker to most.  Larrain and the other writers make her solution seem plausible by virtue of her appeal and her consistently kind actions toward others, which is directly the opposite of how she is initially portrayed—and hated—as a rejecting mother.

My conclusion about what the film is attempting—very artistically—to get across is an observation about the sense of “ownership” people develop toward those close to them, especially their children and spouses.  Ema presents another point of view, that we all belong to one another, and much peace and harmony could result if we could readjust the nature of our attachments.

Mariana Di Girolamo delightfully holds her own in being the main attraction of the film.  She has a mystique about her that captures your attention, and her dances intensify the enchantment.  Gael Garcia Bernal is a perfect somewhat older mate for Ema, one whose ego is strong enough to tolerate the jabs about his fertility but still vital enough to stay in command of his work.

It’s unusual when behaviors that initially seem risky and foolhardy turn out to be caring and loving, as is shown here.  That is, if you buy the story; I’m sure there are many who would be vociferously offended by the film’s premises.  I found it to be intriguing, although must admit that I doubt most people, as I, are not yet ready to embrace its principles.  It is likely only someone as attractive as Di Girolamo as she is portrayed could “sell” the idea, but we’ll see in future years.  Time will tell.

Take a look at a different way of looking at human connections where, maybe, everyone is a winner.