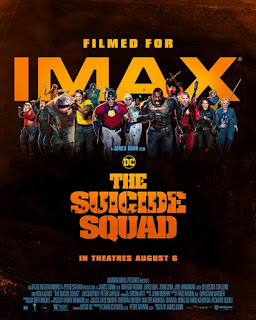 It takes a creative, fanciful mind to dream up a story about such a motley group of characters (all prisoners) charged by the U.S. Government with dismantling a Nazi-like prison and laboratory in a foreign country, Corto Maltese.  Although The Suicide Squad does have drama, it’s also very funny.  Amanda Waller as director of the Suicide squad and researcher of human powers has a testy relationship with the squad she has formed to take down the Nazi-like prison of Jutenheim and its project named Starfish.  In the squad, there is a definite rivalry—sometimes boyish—among leading men Bloodsport (Elba), Peacemaker (Cena), and Col. Rick Flag (Kinnaman), for instance.  And there is Ratcatcher 2’s (Melchoir) attachment to rats and Bloodsport’s phobia about them.  On top of these dramas, we see examples of aspirations for political power, U.S. involvement in other countries’ politics, and the ethics of human research.  But… it’s more of a comedy in its buffoonery, japery, and craziness, with a shark (voiced by Stallone), a woman attached to rats, and a weasel (Sean Gunn) as part of the crew, along with the use of “super-powers” such as polka dots, starfish, and King Shark’s sheer bulk as weapons.   Thank James Gunn as writer and director for all this zaniness.  The trailer refers to “the Horribly Beautiful Mind of James Gunn”, so I think he deserves the credit.

The first squad sent out to Corto Maltese doesn’t make it, the details of which are shown in a silly but amusing way.  Similarly, even though the second squad makes it, they come to find Col. Flag happily engaged with a woman in a tent.  He’ll have explanations for this, but then he joins Harley Quinn (Robbie), Peacemaker, Bloodsport, Ratcatcher 2, and King Shark in a plan to capture the chief scientist of the Jutenheim Laboratory and release all the citizens imprisoned by the government.

“Do they succeed?” you might ask.  To find out, you must experience all the hi-jinks  along the way.  Actually, it doesn’t really matter, because the action is highly entertaining.  For instance, Peacemaker and Bloodsport get into a heated argument about some of Peacemaker’s remarks.  In reply, he says, “I cherish peace with all my heart, and I don’t care how many men, women, or children I kill to get it.”  You can enjoy Harley Quinn getting engaged in a heated affair with the president of Corto Maltese (one of their love trysts destroys a whole room), after which, she is persona non grata in the country and tortured to give up the names of her squad…until…

Another entertaining part for me was to see Ratcatcher 2—first being seen sleeping much of the time with a rat resting on her shoulder—have a clear sense of justice and be able to use rats to effectively defend the team and the city.  I understand that Daniela Melchior had to audition with a rat to be sure she was comfortable with it.  Rats—some of the most abhorred species on the earth doing something heroic?  James Gunn makes it sensible—and endearing—somehow.

Margot Robbie goes way out in portraying Harley Quinn, showing she can be a fine actress in action-comedies just as well as a bad girl in tense dramas (I, Tonya), a tragic Hollywood figure (Once Upon a Time in Hollywood), a queen (Mary Queen of Scots), and the voice of an animated rabbit (Peter Rabbit, Peter Rabbit 2:  The Runaway).  She is an arresting figure who can be as powerful as any in vanquishing enemies, but her cohorts can be super impressive as well.  A stand-out is John Cena portraying a well-intentioned strong arm, Peacemaker, who is effectively held in check by more grounded Bloodsport (Idris Elba).  The cast is strong, perfectly matched to their characters by Yiniva Cardenas and John Papsidera.

All in all, I would say this is a very successful movie in its genre—several notches above most.  In addition to making a female one of the most central figures, it extends the irony to men having big plans to rescue a woman who had already escaped and putting rats in an elevated position for a grand finale.  I did note that mothers are put down as a theme in the story, and dads as well, although not nearly as much.  Note the last gripping hilarious(?) scene.

I would think that anyone with a playful sense of humor and an interest in quirky characters would enjoy Suicide Squad.

Get on board for an adventure plunging you into a world that will take some getting used to, you’ll have but lots of fun along the way.