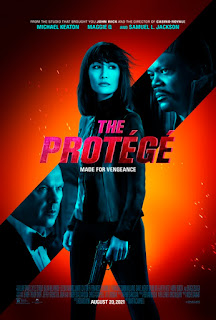 There is a clever premise to this action thriller:  It’s about “finding things that don’t want to be found.” Little references to this pop up throughout the story, always in different contexts, a testament to the skillful work of director Martin Campbell and writer Richard Wenk.  The story begins a little murky, jumping around from Viet Nam, Bucharest, and London with the viewer left in the dark initially as to what is really going on.

Then it settles into a story about a young Vietnamese woman named Anna (Maggie Q) and her mentor Moody (Jackson).  After discovering a traumatized girl in Viet Nam, the professional assassin Moody rescues her and teaches her his craft, which she picks up on with considerable skill.  When one of Moody’s competitors named Rembrandt (Keaton) intentionally crosses Anna’s path, he is more than intrigued and a little incredulous.

As the story winds through the various underworlds and fantastical fights—which resemble choreographed ballets that are never very credible as fights—it continues to be gripping and suspenseful.  Suspenseful not in the sense of “who done it”, but in the question of who will win.  Wenk the writer excels in pitting able foes against one another in such a way that it’s gripping for the viewer every time, no matter the players.

As the primary focus, Maggie Q (shortened by the actress from ‘Margaret Quigley’) holds her own as a star.  She easily captures the mystique of her character and maintains a cold presence even during intimate moments, although she also conveys the warm feelings, teasing, and gratefulness her character has for her mentor.  As seasoned actors, Michael Keaton and Samuel L. Jackson adopt their characters easily and convincingly.  It seems like a slightly different role for Keaton; he comes across more ambiguously than usual, calling for more subtlety in his performance.

Flashbacks telling Anna’s story are extremely well placed, with the most moving ones toward the end of the film.  It’s especially impressive that they make sense psychologically for the woman she has become.  There are also words of wisdom carefully placed at intervals, so the picture becomes something more than the usual action-thriller.

Bravo to the filmmakers for giving us a wondrous ending—part unexpected and part a surprising reasoning/emotionally-laden discussion two main characters have at the end while holding guns on one another.

Protégé is a finely crafted action-thriller that still has fights stretching plausibility typical of the genre, but it doles out suspenseful thrills in full measure, along with some pearls of wisdom.

Posted by donnarcopeland at 10:04 AM