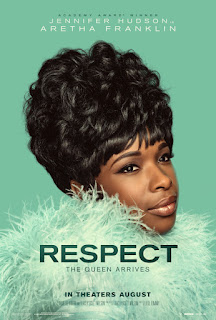 Respect shows a cross-section of Aretha Franklin’s life from her childhood up through the first several of her many successes (1972 album Amazing Grace).  It makes good use of flashbacks to fill out the early stories, showing the kind of background from which Aretha came and the strong influence of her father throughout her life.  His influence even extends to her standing up to him and forging a life and career unbeknownst to him.  That he did not approve didn’t seem to lessen their continued deep love for one another even through rocky times.

And there would be many rocky times as a function of the first man Aretha chose to marry, the rigors of a music idol’s life, a certain degree of rebelliousness, and her own susceptibility to alcoholism.  The story is well told, and although beginning sections of the 2½ hour film could have been shortened, the rest of the production is gripping.  The processes by which Aretha and her fellow musicians are composing and recording songs is highly entertaining, both for their explication of the process and the discord/accord that rises and falls.  When a song hits that special note, the audience breathes a sigh of relief and has a joyful moment along with the musicians.

Young director Liesl Tommy, whose previous work has been in television, shows great sensitivity in the types of experiences she has chosen to feature, in the aptness of the flashbacks, and in the overall picture of the times during these periods of Franklin’s life.  She has shown good judgment as well in showing almost complete renditions of many of Aretha’s most popular songs.  Credit is likewise due to the primary writer, a close friend of Liesl, Tracey Scott Wilson (TV’s “Fosse/Verdon” and “The Americans”), who was thrilled to work on the project after being a fan.  She says, “It’s one of those things where you want to get it right. She’s just so important. There’s not many musical biopics about Black women in general. It was really important to us to represent her as she was, with a lot of love and care.”

As Aretha, Jennifer Hudson (chosen by Aretha before her death), captures the music and the complex/complexing personality that was Aretha—her early sense of herself as someone who knows her own mind and has clear opinions and one with a rebellious streak who may show flashes of temper.  At the same time, one who could be meek and at sometimes be sensitive to another person’s point of view.

Forest Whitaker, with so many credentials in portraying complex characters, is a perfect choice to stand in as a powerful man with obvious weaknesses and contradictory positions.  All the actors chosen are strong:  Audra McDonald cameos of Aretha’s mother; Marlon Wayans as an abusive, controlling husband; Tituss Burgess as a mentor to the child Aretha through her adulthood; and the music producers played by Mark Maron and Tate Donovan.

As a biopic, Respect is likely to please the fans of Aretha Franklin.

“How does the woman with the greatest voice of all time find her own voice?"

Posted by donnarcopeland at 8:18 AM