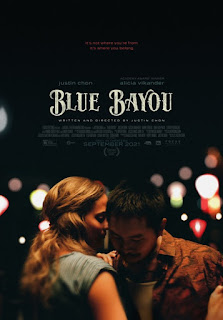 This film might have had potential, but it needed disciplined editing; way too many dramatic elements were included, resulting in a hodgepodge that strains credulity, especially at the end.

Antonio (Chon) is a tattoo artist who has trouble finding a job to support his wife Kathy (Vikander) and their two children, one a newborn.  He often runs into discriminatory remarks about his race, and the filmmakers want that characteristic visible throughout.  He was born in Korea, but was adopted when he was three by an American couple, so he has grown up in the U.S.  Other trouble he encounters is that his American parents never saw to it that he was made an American citizen, so he is threatened with deportation, even though he has lived here for 30 years, most of his life.

Other issues that arise include Kathy’s ex-husband, who wants to see their daughter, but the child doesn’t want to see him after he had previously abandoned her and her mother.  He and his dirty cop partner stir up major problems, contributing to more drama, particularly as Antonio’s reactions to them add significantly to his difficulties.

Woven into the story is a woman who takes pity on Antonio desperately hawking tattoos on the street and asks for one for herself.  She is an immigrant from Viet Nam and has stories of her own to tell, but she is one of the few characters shown to be kind-hearted and generous.

Most of writer/director Chon’s previous work is as an actor, for which he has been nominated and won awards at film festivals.  He also has promise as a writer/director but needs more guidance in creating sympathetic characters and choosing one storyline that will be the prominent thrust in a work, as opposed to multiple threads that compete with one another.

My favorite part of this film is when Alicia Vikander—one of our finest actresses—sings the song “Blue Bayou.”  Her acting skills are readily apparent in Blue Bayou, but the script would be improved by making her a stronger, more sensible force, rather than showing her as hysterical.  Having her physically attack a policeman is a huge mistake in the script.

There are additional problems with inconsistencies and improbabilities, which reduces this this potentially moving account too implausible.

A film with potential that deserved serious editing.