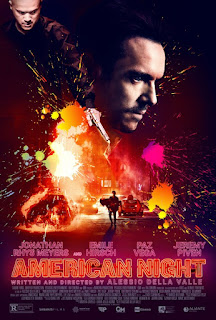 What a disappointment.  Writer-director Alissio Della Valle has whipped up something that is supposed to be an art intrigue, but the production from writing through editing leaves much to be desired.  If I hadn’t been going to review it, I would have exited before the end.  The script is so mundane it’s close to being hilarious in scenes that aren’t supposed to be funny.

The story goes like this:  The heir-apparent of Andy Warhol’s Pink Marilyn Monroe, Michael Rubino (Hirsch), the self-entitled son of a Mafia boss and aspiring painter no less, has gotten into the cross hairs of forger-turned-art-dealer John Kaplan (Meyers).  They’re both after the Warhol, which has gone missing.  A cheap addition to the plot is putting the two also in competition for the same woman, beautiful museum conservator Sarah (Vega).  To add to the confusing mix is stuntman Vincent (Piven), who finds the painting, brings it to John, and asks for a cut of the profits.

For me, the movie was doomed the minute I saw Emile Hirsch as the son of a mafia boss who is about to succeed his father.  Hirsch has none of the characteristics we usually think of in those who have grown up in a crime family.  He just doesn’t look nor act the part.  I’m usually a fan of Jonathan Rhys Meyers, but again, he failed to convince me of his (reformed) mercenary nature.  His trysts with Sarah have some chemistry, but not enough to convince me of his passion in the end.

I had hopes for this movie when I saw the cast who have been great in previous films but miscasting and the script—along with direction by Alessio Delle Valle--pretty much doomed it.

Save your precious time and miss this movie with a good cast but a “wha?...” kind of plot.

Posted by donnarcopeland at 12:47 PM