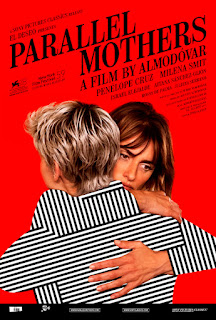 Even though the viewer can at times imagine what’s going to happen in this film, it still maintains its suspense and bit of mystery throughout.  Writer/director Almodovar’s work and the actors—especially Penelope Cruz—make viewing the film well worthwhile.  Two unmarried women are in the hospital to give birth, which had been unplanned for both of them.  Janis (Cruz) is older and more mature of the two, whereas Ana (Smit) is less grounded and has had an unhappy home life with each of her parents.  She’s still living with her mother, Teresa (Sanchez-Gijon), an actress, in an ambivalent relationship on both sides.

Janis elects to have her baby and continue the family tradition of being a single mother.  Although the father (Elejalde) has various solutions, they aren’t acceptable to Janis and she insists on the two of them separating.  There is one hook; she had engaged Arturo (Elejalde), an anthropologist, to uncover the grave of her grandfather and others who were victims of Franco’s Fascist government.  The wives/daughters/granddaughters of these men have all pledged to see that they got a proper burial.  There is a certain amount of professional aid and red tape to achieve this, so it will take a fair amount of time.

Meanwhile, the two mothers go their separate ways, although they had become close during their confinement and exchanged contact information.  Their paths do indeed cross in planned and spontaneous circumstances, after which, major twists and complications ensue.  This is the heart of the movie in both senses of the word.  A major ethical dilemma occurs for one character, and others have to make difficult decisions.

This is another instance in which Almodovar’s empathy and understanding of women becomes paramount in relating a story that is dramatic but believable at the same time.  One of the beautiful things to observe in this case is the honor shown by so many of the characters.  Although heart-rending things have happened, the viewer leaves the theater feeling good about humanity and the world.

At first, it seemed an odd juxtaposition of placing birthing and mothers next to the brutal deaths of ancestors, but in consideration of the reality of births and deaths being ongoing occurrences in life, it makes sense to me.  The “feel good” part of Parallel Mothers comes with the realization that life goes on, whatever happens and whatever we make of it; it’s bigger than any individual person.  And our happiness and ultimate satisfaction lies in the ties that bind us all together.

Another well founded and entertaining production of the master Pedro Almodovar.

Posted by donnarcopeland at 12:57 PM